Home » Paranormal » THE GREAT BEAST AND THE MOST INFLUENTIAL OCCULTIST OF ALL TIME: ALEISTER CROWLEY

THE GREAT BEAST AND THE MOST INFLUENTIAL OCCULTIST OF ALL TIME: ALEISTER CROWLEY

Posted by tin Posted on 6:33 PM with No comments 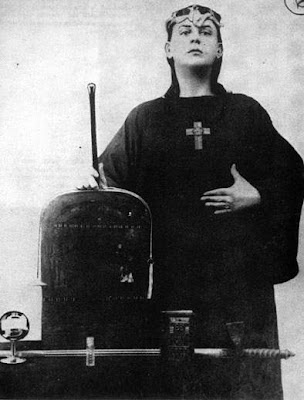 Aleister Crowley, born Edward Alexander Crowley, and also known as both Frater Perdurabo and The Great Beast,
was an influential English occultist, mystic, ceremonial magician, poet and mountaineer, who was responsible for founding the religious philosophy of Thelema.

In his role as the founder of the Thelemite philosophy, he came to see himself as the prophet who was entrusted with informing humanity that it was entering the new Aeon of Horus in the early 20th century.Born into a wealthy upper class family, as a young man he became an influential member of the esoteric Hermetic Order of the Golden Dawn after befriending the order's leader, Samuel Liddell MacGregor Mathers. Subsequently believing that he was being contacted by his Holy Guardian Angel, an entity known as Aiwass, while staying in Egypt in 1904, he "received" a text known as The Book of the Law from what he believed was a divine source, and around which he would come to develop his new philosophy of Thelema. He would go on to found his own occult society, the A∴A∴ and eventually rose to become a leader of Ordo Templi Orientis (O.T.O.), before founding a religious commune in Cefalù known as the Abbey of Thelema, which he led from 1920 through till 1923. After abandoning the Abbey amid widespread opposition, Crowley returned to Britain, where he continued to promote Thelema until his death.Crowley was also pansexual, a recreational drug experimenter and a social critic. In many of these roles he "was in revolt against the moral and religious values of his time", espousing a form of libertinism based upon the rule of "Do What Thou Wilt". Because of this, he gained widespread notoriety during his lifetime, and was denounced in the popular press of the day as "the wickedest man in the world."Initiated to the highest levels of Freemasonry and high priest of the Golden Dawn, said: "A white male child of perfect innocence and intelligence makes the most suitable victim.Aleister Crowley's famous saying, DO AS THOU WILT, actually came from Benjamin Franklin. Franklin was Satanist and indulged in child sacrifice. Franklin attended the drunken, ritual orgies of a secret society called, among other things, the Hellfire Club. They would get drunk, dress prostitutes up like Nuns and have orgies in underground caves, which resembled Black Masses (although they "worshipped" pagan deities Bacchus and Venus). Their motto Fait ce que vouldras (Do what thou wilt) was later used by Occultist Aleister Crowley. Truth is indeed stranger than fiction.The Marilyn Manson song “Misery Machine” contains the lyrics, “We’re gonna ride to the abbey of Thelema.” The Abbey of Thelema was the temple of Occultist Aleister Crowley.Crowley himself was terribly decadent. A happily heroin-addicted, bisexual Devil worshiper, he asked people to call him "The Beast 666." Crowley believed that he was literally the antimessiah of the apocalypse.During the first World War, Crowley transferred his activities to America. The press proclaimed him "the wickedest man in the world." He also spent time in Italy, but was expelled because Italian authorities accused his disciples of sacrificing human infants in occult rituals. According to one source, Crowley resided in the Abbey of Thelema near Cefalu Sicily, and revived ancient Dionysian ceremonies. During a 1921 ritual, he induced a he-goat to copulate with his mistress, then slit the animal's throat at the moment of orgasm. Crowley has remained an influential figure and is widely thought of as the most influential occultist of all time.
Tweet