Posted by tin Posted on 6:39 PM with No comments 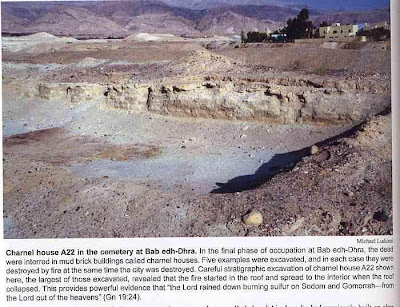 Sodom and Gomorrah have been described as two great cities in the Book of Genesis and other religious texts such as the New Testament.
According to the Biblical sources God destroyed these two cities as there were too few righteous men in the cities and it had become a hub for evil or irreligious activities.

Thus the cities were destroyed by the wrath of God. Sodom is a word that you find in the modern dictionary and it means unnatural sexual acts. So they have been cursed places even after so many years. What we known about these cities is that they were a part of the Cities of Plain. There were five cities that comprised the Cities of Plain such as Gomorrah, Sodom, Admah, Zoar and Zeboim.

The cities were located in the plain, so they should not be located in the low area now covered by the Dead Sea. These cities were well known in the first century, as Josephus said, "The traces or shadows of the five cities are still to be seen." If Josephus could see them, then we should be able to see them also. The water level of the Dead Sea has fallen since the time of Josephus, so the areas Josephus saw in his day are still visible today.

The cities of the plain were destroyed as a warning for all that this same event will happen again one day to the wicked. One would think God is capable of preserving this ancient lesson for us to see and to learn from.

"Then the Lord rained brimstone and fire on Sodom and Gomorrah, from the Lord out of the heavens" Genesis 19:24. "Turning the cities of Sodom and Gomorrah into ashes, condemned them to destruction, making them an example to those who afterward would live ungodly" II Peter 2:6. (The word for "example" means an exhibit for warning.)

Each of the cities of the plain contain evidence of brimstone which God rained down upon the cities to destroy them. The brimstone is composed of 96-98 percent sulfur, with trace amounts of magnesium which create an extremely high temperature burn. This is the only place on earth where you can find 96 percent pure monoclinic sulfur in a round ball. This brimstone is NOT from any type of geo-thermal activity as there is no evidence of such in the area, and geo-thermal sulfur nodules are only 40 percent pure sulfur and are of the rhombic type.

God rained down upon these cities was so hot that it burned the limestone blocks that were used in the construction of the cities. The ash there today is composed of Calcium Sulfate and Calcium Carbonate which are by-products of the limestone and sulfur burning.

Everything in these cities burned and turned into ash, including the buildings themselves as the Bible says that the cities were to be destroyed also. The Bible told us that God rained down "fire and brimstone" When God rains down fire, it is a consuming fire, just like the time of Elijah when God sent down fire to destroy the stone altar, the limestone buildings here were totally destroyed and turned into ash.
Tweet