Home » Religion » THE EXODUS WHEN MOSES DIVIDED THE SEA.

THE EXODUS WHEN MOSES DIVIDED THE SEA.

Posted by tin Posted on 6:40 PM with No comments 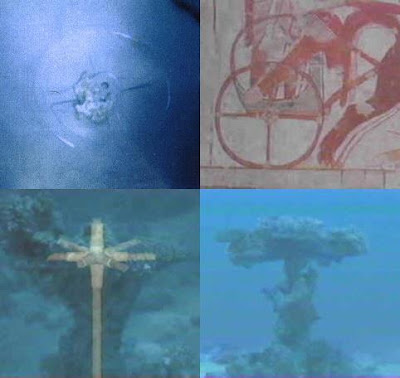 Allegedly Chariot Wheels Found in the Sea at Nuweiba!

Above, left, photo taken of a gilded chariot wheel that remains on the sea floor. It was found by Ron Wyatt using a molecular frequency generator from his boat above, after he set the equipment to search for gold.

The Bible said all the chariots of Egypt and 600 choice chariots, or gold veneered models, were in the army pursuing God's people. It is speculated there were 20,000 chariots destroyed that day. Above, right, is a drawing of a four spoke chariot found in an Egyptian tomb from the same time period.

Four, six and eight spoke wheels are found here in the gulf, and were only used at the same time during the 18th dynasty or 1446 BC when the exodus took place.
Tweet