Territorial conflict between Tokyo and Beijing

Posted by tin Posted on 8:20 PM with No comments 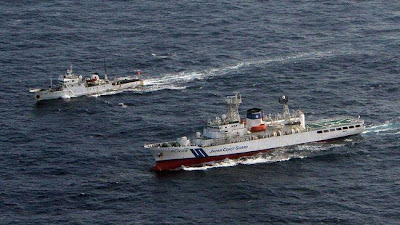 Amid a bitter territorial conflict between Tokyo and Beijing, Japan has warned that it could send troops to a group of disputed uninhabited islands in the East China Sea, if row over the territory intensifies.
Japan’s Defense Minister Satoshi Morimoto said on Friday that Tokyo would use force to defend the Senkaku Islands.

The islands in the East China Sea are known as the Senkaku Islands in Japanese while China refers to them as the Diaoyu islands.

“Senkaku or not, defense of islands is principally conducted by the coastguard and police,” Morimoto said, adding that “However, the law stipulates that Self-Defense Forces troops can act” if local authorities are unable to handle the situation.

The development comes as both eastern Asian countries lay claims to the resource-rich islands.

On July 11, China called on Japan to respect Beijing’s “indisputable sovereignty” over the islands in the East China Sea.

Chinese Foreign Minister Yang Jiechi met with his Japanese counterpart Koichiro Gemba on the sidelines of the Association of Southeast Asian Nations (ASEAN) in the Cambodia capital Phnom Penh and “reaffirmed China’s principled position” on the islands.

“He stressed that Diaoyu Islands and their affiliated islets have always been China’s territory since ancient times, over which China has indisputable sovereignty,” a statement from the Chinese delegation read.

This is while Gemba, for his part, lodged a “strong” protest with Jiechi over the entry of Chinese patrol ships into waters near the Japan-controlled Senkaku Islands.

Chinese authorities, on the other hand, said the vessels conducted routine patrols in the East China Sea to safeguard the interests of Chinese oceanic fishing industry and ensure safety of Chinese fishermen.
Tweet