Posted by tin Posted on 8:29 PM with No comments 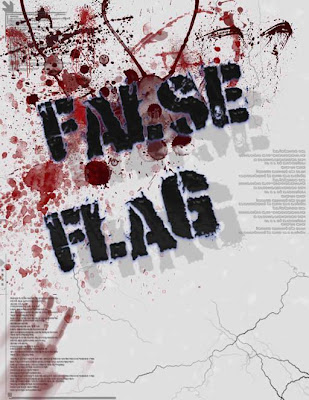 "False flag terrorism" occurs when elements within a government stage a secret operation whereby government forces pretend to be a targeted enemy while attacking their own forces or people.
The attack is then falsely blamed on the enemy in order to justify going to war against that enemy. Or as Wikipedia defines it:

False flag operations are covert operations conducted by governments, corporations, or other organizations, which are designed to deceive the public in such a way that the operations appear as if they are being carried out by other entities. The name is derived from the military concept of flying false colors; that is, flying the flag of a country other than one's own. False flag operations are not limited to war and counter-insurgency operations, and have been used in peace-time; for example, during Italy's strategy of tension.


There are many examples of false flag attacks throughout history. For example, it is widely known that the Nazis, in Operation Himmler, faked attacks on their own people and resources which they blamed on the Poles, to justify the invasion of Poland. And it has now been persuasively argued — as shown, for example, that Nazis set fire to their own parliament, the Reichstag, and blamed that fire on others. The Reichstag fire was the watershed event which justified Hitler's seizure of power and suspension of liberties.

And in the early 1950s, agents of an Israeli terrorist cell operating in Egypt planted bombs in several buildings, including U.S. diplomatic facilities, then left behind "evidence" implicating the Arabs as the culprits (one of the bombs detonated prematurely, allowing the Egyptians to identify the bombers). Israel's Defense Minister was brought down by the scandal, along with the entire Israeli government. click here http://www.jewishvirtuallibrary.org/jsource/History/lavon.htmlfor verification.

The Russian KGB apparently conducted a wave of bombings in Russia in order to justify war against Chechnya and put Vladimir Putin into power .

And the Turkish government has been caught bombing its own and blaming it on a rebel group to justify a crackdown on that group. Muslim governments also play this game. For example, the well-respected former Indonesian president claimed that their government had a role in the Bali bombings.

Moreover, declassified U.S. Government documents show that in the 1960s, the U.S. Joint Chiefs of Staff signed off on a plan code-named Operation Northwoods to blow up American airplanes (using an elaborate plan involving the switching of airplanes), and also to commit terrorist acts on American soil, and then to blame it on the Cubans in order to justify an invasion of Cuba. The operation was not carried out only because the Kennedy administration refused to implement these Pentagon plans.

Republican U.S. Congressman Ron Paul stated that the government "is determined to have martial law." He also said a contrived "Gulf of Tonkin-type incident may occur to gain popular support for an attack on Iran." Former National Security Adviser Brzezinski told the Senate that a terrorist act might be carried out in the U.S. and falsely blamed on Iran to justify yet another war.
Tweet