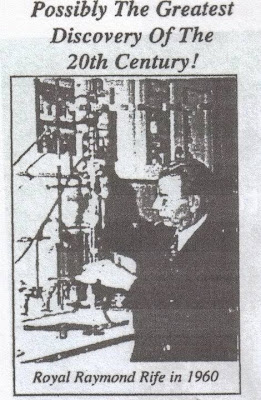 "Rife was a brilliant scientist, born in the late 1800’s. After studying at Johns Hopkins, Rife developed bioelectric medicine technology that is still commonly used today in the fields of optics, electronics, radiochemistry, biochemistry, ballistics and aviation.
He received 14 major awards and honors and was given an honorary Doctorate by the University of Heidelberg for his work.

In the 1930’s Rife invented a super microscope that used light in a revolutionary design. It enabled him to see a virus-size microbe, invisible to the naked eye, that could not even be seen with an electron microscope. More important, unlike electron microscopes, the microbe remained alive. He found that every micro-organism has a “mortal oscillatory rate” – a point at which it will shatter or break apart when bombarded by sound waves, like an intense musical note that shatters a glass.

He discovered the microbe that caused, or at minimum was deeply involved with cancer! Once the frequency for the cancer-linked microbe was identified, it was a simple step to test his world-shaking discovery on mice, and then move to clinical treatment of supposedly “terminal” cancer patients.

In 1934 Rife and a team of doctors and scientists from leading medical research facilities cured 16 out of 16 cancer patients using the Frequency Machine. Over the next four years the instruments and methods were refined. Some of North America’s most brilliant cancer researchers visited Rife’s laboratory and became involved in a secret research committee at U.S.C.

However, the threat to orthodox medicine was too great. Without any consideration for their Hippocratic Oaths or the well being of people, medical officials and societies mounted a furious counterattack against Rife’s monumental discovery before the American public could be informed of it. Doctors who were using Rife’s instruments to treat cancer and other diseases were threatened with losing their licenses and being thrown into jail. Most meekly surrendered. An energy medicine laboratory complex, which was in the process of verifying Rife’s discoveries, was mysteriously burned, while the owner was in California visiting Rife!

Rife was hauled into court, prevented from leaving for England where leading scientists were prepared to establish an independent testing facility to substantiate the great discovery, and distribute his unique instruments worldwide. All medical journals were censored and one of the greatest scientific and medical discoveries of the 20th century was ruthlessly shoved into a dungeon of history.

In the late 1980s an evolutionary shift slowly began to unfold throughout the world. Bio-energetic - “subtle energy” interactions of the human body - became a serious research area in leading universities, private medical research facilities and government agencies (NASA). A grassroots interest in alternative medicine simultaneously erupted to confront drug medicine practitioners with their failures and expense.

From the information whirlwind, spurred by the Internet and “information democracy” a new interest has emerged in Royal R. Rife’s extraordinary cures, lost 60 years ago. Just over the horizon lies the awakening of mainstream America and possibly the delivery of Rife’s lost discoveries, to be integrated into a strikingly different, 21st century healing model, enabling natural, painless, inexpensive methods of curing many diseases."
Tweet