Posted by tin Posted on 8:01 PM with No comments 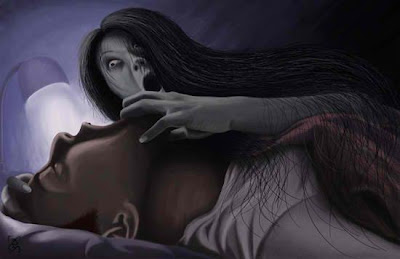 Sleep paralysis is now being studied as an explanation for terrors in the night, which have been experienced by people across all cultures and for thousands of years.
If one is looking for a purely physical ......and scientific explanation for these terrible nightmares, this one works quite well. For some it will offer relief but for others, doubt.

Sleep paralysis is a condition in which someone, most often lying in a supine (face up) position, about to drop off to sleep, or just upon awaking from sleep realizes that s/he is unable to move, or speak, or cry out. This may last a few seconds or several moments, occasionally longer. People frequently report feeling a 'presence' that is often described as malevolent, threatening, or evil. An intense sense of dread and terror is very common. The presence is likely to be vaguely felt or sensed just out of sight but thought to be watching or monitoring, often with intense interest, sometimes standing by, or sitting on the bed. On some occasions, the presence may attack, strangling and exerting crushing pressure on the chest.

In addition, the paralysis may be accompanied by terrifying hallucinations (hypnopompic or hypnagogic) and an acute sense of danger.Sleep paralysis is particularly frightening to the individual because of the vividness of such hallucinations. The hallucinatory element to sleep paralysis makes it even more likely that someone will interpret the experience as a dream, since completely fanciful or dream-like objects may appear in the room alongside one's normal vision. Some scientists have proposed this condition as an explanation for alien abductions and ghostly encounters

(The terms alien abduction or abduction phenomenon describe "subjectively real memories of being taken secretly against one’s will by apparently nonhuman entities and subjected to complex physical and psychological procedures.)