Posted by tin Posted on 7:57 PM with No comments 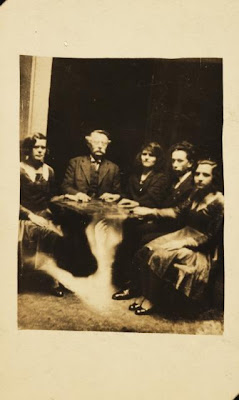 A photograph of a group gathered at a seance, taken by William Hope (1863-1933) in about 1920.
The information accompanying the spirit album states that the table is levitating. In reality, the image of a ghostly arm has been superimposed over the table using a double exposure. Collection of National Media Museum.
Talking directly to a spirit is what all spiritual researchers are after, and possibly the best way of doing this is through the use of a séance. In a traditional séance, a group, led by a person with some mediumistic skill, will attempt to talk to any spirits that are around. Today, with the rise in occult temples, pagan groups and new age study groups, it has become more common for leaderless séances to take place.Séances became popular with the rise of spiritualism, but the practice was around long before then. One of the earliest books on the subject was published in 1760: Communitation With the Other Side, written by George Lyttelton. Yet during the witch trials of 1480 onwards it was not unheard of for people to agree that the coven or group of witches would call up the dead to talk to them, showing that the idea of a group of people communicating with the dead was around a long time before 1760.To many minds, communicating with ghosts and spirits is possible – all it takes is a little time, a lot of patience and an inquiring mind. When it comes to looking at spiritual issues, it might be said that the only experience that matters is that which means something to the person going through it. Being enquiring, intuitive and inquisitive will ultimately reveal more to the serious researcher into the paranormal than hundreds of other people’s views.
Tweet