Posted by tin Posted on 9:23 PM with No comments 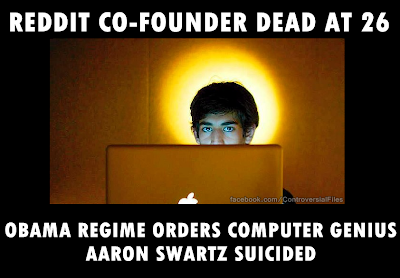 A new Foreign Military Intelligence Main Directorate (GRU) report circulating in the Kremlin today is saying that one of the United States top computer geniuses,
named Aaron Swartz (1986-2013) , was, “in all probability,” suicided by forces loyal to the Obama regime seeking to “set an example” for other dissident forces opposed to the American governments continued crackdown on leakers of US secrets.

According to this report, GRU intelligence analysts tracking the Obama “death squads”, that in the past fortnight have assassinated two prominent American gun support activists, indentified one of these VIPER teams “operating” in the Crown Heights, Brooklyn, section of New York City this past week where shortly afterwards Swartz was discovered dead of an apparent hanging.

Swartz, this report continues, fits the profile of computer dissidents long targeted by the US; which include Gary McKinnon, the Scottish systems administrator and hacker who was accused by the US, in 2002, of perpetrating the “biggest military computer hack of all time,” but whose extradition to America was blocked by the UK, and US Army Private Bradley Manning, who stands accused of being the whistle blower behind what is called the WikiLeaks Scandal and whose confinement by the Obama regime prompted Juan E. Mendez, a United Nations Special Rapporteur on torture, to publish a report saying that Manning’s detention conditions had been “cruel, inhuman and degrading”.

The “crimes” Swartz was being accused of committing by the Obama regime, this report says, were wire fraud, computer fraud, unlawfully obtaining information from a protected computer, and recklessly damaging a protected computer, in relation to downloading roughly 4 million academic journal articles from JSTOR (short for Journal Storage) which is a digital library for American academics founded in 1995.

The “reality,” however, behind the crimes Swartz was accused of by the Obama regime, and which the US Department of Justice (DOJ) was seeking a 50 year prison sentence and $4 million fine for, according to GRU analysts in this report, was nothing more than this young computer genius putting a computer in a broom closet he neither sought to hide, nor did the owner of the computers he accessed, Massachusetts Institute of Technology (MIT) wish to prosecute him for.

To why Swartz was so feared by the Obama regime can be glimpsed in the writing about him by one of his closest mates, Cory Doctorow, the famous Canadian journalist and co-editor of the weblog Boing Boing, who wrote, “Aaron had an unbeatable combination of political insight, technical skill, and intelligence about people and issues. I think he could have revolutionized American (and worldwide) politics. His legacy may still yet do so.”

Doctorow further noted in his article about Swartz, titled RIP, Aaron Swartz, that this young computer genius may have, also, been targeted by the Obama regime who have been furiously hunting for computer hackers linked in any way whatsoever to Manning.

Seemingly unbeknownst to the community of American computer experts mourning Swartz today is that his death, should it have, indeed, been orchestrated by the Obama regime as this GRU report suggests, under US law it is completely legal as their President has the right to assassinate anyone he so chooses, in any manner he chooses, all without either charges or trial.

In fact, in 2010, the Obama regime drafted a secret legal memorandum claiming that the President had the power to order the killing of an American citizen without a trial. Several US officials described this secret memo as a 50-page document drafted by the Justice Department’s Office of Legal Counsel. This is the same government agency, the WSWS news service reports, that drafted the notorious “torture memos” during the Bush administration, justifying waterboarding and other abuses of prisoners at Guantanamo Bay and other US military and CIA-run prisons.

So frightening has the Obama regime become that the Bloomberg news service reported this past October (2012) that, “Eric Holder, attorney general under President Barack Obama, has prosecuted more government officials for alleged leaks under the World War I-era Espionage Act than all his predecessors combined, including law-and-order Republicans John Mitchell, Edwin Meese and John Ashcroft.”

Falling on deaf ears, however, were President Putin’s warnings to the American people in 2009 wherein he said the US should take a lesson from the pages of Russian history and not exercise “excessive intervention in economic activity and blind faith in the state’s omnipotence”.

“In the 20th century, the Soviet Union made the state’s role absolute,” Putin said during a speech at the opening ceremony of the World Economic Forum in Davos, Switzerland. “In the long run, this made the Soviet economy totally uncompetitive. This lesson cost us dearly. I am sure nobody wants to see it repeated.”

The death of Aaron Swartz, however, shows that once again these Americans, who continually fail to remember the past, are doomed to repeat it.
http://www.eutimes.net/2013/01/obama-regime-orders-computer-genius-aaron-swartz-suicided/
Tweet