Posted by tin Posted on 9:20 PM with No comments 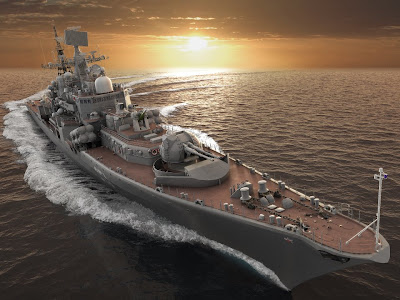 Russia says it is planning to hold a series of major naval drills off the Syrian coast in the Mediterranean as the US and its allies plan to deploy missiles on Syria’s border.
Russian Defense Ministry said on Friday that vessels from the country’s Black Sea and Baltic fleets will take part in the exercises, which are set to be held in the eastern Mediterranean.

According to the ministry, the drill will involve anti-submarine, anti-ship and air defense operations. Russian Defense Minister Sergei Shoigu had earlier said that the naval exercises would be “the biggest in the history of the country.”

“A tactical group of Black Sea Fleet warships led by the Moskva cruiser will stage a naval exercise in the eastern Mediterranean,” the Ministry said without giving an exact date for the exercises.

Russia has a naval base at Syria’s port of Tartus. In August 2012, three Russian warships performed maritime exercises in the Mediterranean.

The upcoming drill comes against a backdrop of tensions between Moscow and the West over Syria. While Russia has repeatedly warned against any military intervention in Syria, Western states have threatened to intervene if necessary.

Russia and the West are also at loggerheads over the deployment of NATO’s Patriot missiles along Turkey’s border with Syria.

Meanwhile, top US and Russian officials have held talks with the UN-Arab League Joint Special Envoy on Syria Lakhdar Brahimi at the UN headquarters in Geneva over the crisis in Syria.