Home » Religion » The Foundation of Israel and Zionism And the Difference of Judaism to Zionism.

The Foundation of Israel and Zionism And the Difference of Judaism to Zionism.

Posted by tin Posted on 12:08 AM with No comments 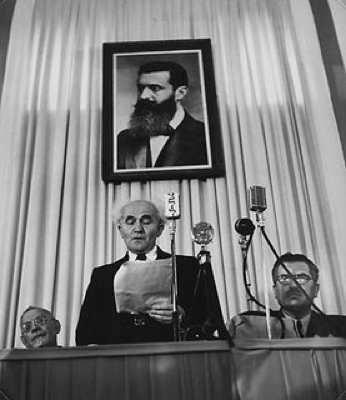 After World War II, many Jews fled to Palestine and established the new nation of Israel, thus antagonizing a huge new set of people
– the Muslim community which now numbers about 1/5 of the world’s population. Hitherto Muslims had been particularly anti-Jewish, but after the Zionists massacred villages and forced the original population to flee, Muslims turned against the Jews. It would have been far preferable for Jews to migrate to any of the English-speaking nations.

The underlying premise of zionism is Anti-Christian. This is because Zionism posits the incompatibility of Jew and Gentile. This incompatibility is spelled out by the founder of Zionism, Theodore Herzl:

— “I look upon the Zionist movement from the standpoint of Anti-Semitism which stems from economic envy, inherited prejudice, and religious intolerance. Anti-Semitism grows daily among the nations since its causes cannot be prevented.” — The Jewish State, 1896.

Here, the Arch Prophet of Zionism, Theodore Herzl, presents the Gentiles as evil predators. But the Jews he presents as innocent victims. But we all know from our own personal experiences that the Jews are anything but innocent little lambs! And our encounters with Jews prompt us to ask the question whether “Anti Semitism” is not for the most part wholly justified.

The Christian message which Zionism wars against, is completely different than the hate-affirming Zionist ideology:

“Jesus Christ has broken down the middle wall of partition between Jews and Gentiles. His purpose was that through His death and resurrection He might make the two into one new man so making peace.” — Epistle To The Ephesians, 61 AD, St Paul.<<<ZIONISTS STOLE THE LAND OF PALESTINE>>>

Zionists have long maintained the myth that Palestine was uninhabited before their arrival. However, the British Foreign Secretary, Lord Curzon, writing on October 26, 1917, refutes this myth:

“There are over a half a million Arabs in Palestine. They own the soil which belongs either to individual landowners or to village communities. They will not be content either to be expropriated for Jewish immigrants or to act merely as hewers of wood and drawers of water to the latter.”

There were only 19 small Jewish settlements in Palestine by 1900, all of them established by Edmond de Rothschild. Some of the settlements were in the Jaffa citrus grove area whose owners were mostly Arabs.

Jaffa was the most advanced city in Palestine with its banking, fishing, manufacturing, and agriculture industries. It should be noted that the majority of all Arabic publications and newspapers in Palestine were published in Jaffa. Thus the Zionists targeted Jaffa in order to destroy the Palestinian “propaganda” arm.

There was also desecration of Christian churches in Jaffa Here. Father Deleque, a Catholic priest, reported:

“On May 13 1948, Jewish soldiers broke down the doors of my church and robbed many precious and sacred objects. Then they threw the statues of Christ down into a nearby garden.”

On March 11,2008, the Reverend John Hagee spoke at Rabbi Stephen S. Wise Temple in Los Angeles Here. Hagee was given several standing ovations by his Jewish audience especially when he avowed his support for the Zionist State of Israel. Hagee said:

— “I regard the founding of the State of Israel to be the most important event of the 20th Century. This ‘in-gathering’ is a necessary prelude to the rebuilding of the Temple.” —

— “I do not believe that Israel ought to give up any territory it now controls.” —

The problem with Hagee and all of the Christian-Zionists is that they are making God an accomplice to Zionist racism, theft, and murder. In other words, “God is not the author of evil but of peace!”<<<THE ZIONISM HAS TRIUMPHED >>>

Zionism began in Europe in the late 19th century like Communism. It was well financed (insert Rothschild) and quickly became influential in Europe. During World War I, it promised to deliver America on a silver platter to Britain in exchange for the Balfour Declaration, supporting a Jewish nation in Palestine. And deliver it did!

And for the rest of the century Zionism "steered" America... particularly Washington. A continuing series of Jewish bankers and financiers have "had the ear" of all American presidents since World War I. In the early 1930s, Zionism demanded "regime change" in Germany; Hitler had to go. He stood in the way of Zionist exploitation of Germany, its property, its economy, its finances, etc. (insert Rothschild) just like the Federal Reserve System installed in America exploits the American people who unknowingly pledged all of their property and wealth, public and private, to the Federal Reserve which is owned by European Jewish banking families.

Today, in America, a tiny fraction of the populace, Zionists, own or control between one third and one half of the nation's total private wealth while millions of Americans are laid off and fifty million live in poverty. They dominate the finances of the nation. Remember Rothschild's motto, "Let me control the money of a country and I care not who is in power."

There is no greater power in the world today than that wielded by the manipulators of public opinion in America. No king or pope of old, no conquering general or high priest ever disposed of a power even remotely approaching that of the few dozen men who control America's mass media of news and entertainment. The American people are captive to this vile parasite.<<<THE DIFFERENCE OF JUDAISM (True Faith) TO ZIONISM (Racist and Greed)>>>

There is a big difference between Zionism and Judaism. Judaism describes the Jewish faith whereas Zionism defines the philosophy behind an exclusive Jewish state which is the physical and spiritual homeland meant exclusively for the Jewish people. The latter is a very fundamentalist outlook, and is much reviled, particularly amongst the Arabs.

All Zionist are Jews, but not all Jews are Zionists. There are Jews in many parts of the world. Most of them live in Israel and America. Now all of them certainly believe in Judaism, but not all of them would subscribe to the hard-line exclusivist vision of the Zionists. The Zionist movement arose in Europe in the late nineteenth century out of a desire to end the exile of the Jewish people and return them to the holy land by force if necessary. Initially they found very little support among the Jewish populace but could make some impression after the horrors of the Second World War, as perpetrated on the Jews, made them pay heed to this notion. Judaism on the other hand simply means living by the tenets of the Jewish holy book, the Torah. Whatever befell them was the will of God, as expressed through the Torah and there never was any attempt to forge any sort of a national, political or sectarian agenda.

Judaism as a religion is really a simple way of life, where man lives his life quietly and with dignity, while observing the traditional Jewish rituals that are ordained in the Torah. Zionism on the other hand speaks of the exclusivity of the Jews, their right on the holy land, the acquisition and conquest of lands held by other people, which is rightly their own. As opposed to a practitioner of Judaism, for whom a Jew is a person who believes in God, and strives to carry out his word, as passed down to him in the Torah. He does not think in terms of the lineage of a Jewish race which is separate from that of the others.

A practitioner of Judaism will have a more nuanced approach towards life, as he would know that Jewish history is a rich, checkered and much splendored tapestry which plays out over many nations and regions. A Zionist on the other hand would have very little factual information about his people, but a fanciful notion about the origin of his race.

The Jewish people or the followers of Judaism have often suffered persecution at the hands of European nations down the ages on account of their race. It is ironic that the Zionists among the Jews would show the same kind of hatred to other people, namely the dispossessed Palestinians. This is even more ironic for the reason that Asian nations were generally very tolerant of the Jews’ presence down the ages.

According to the traditions of Judaism the task that God set before Jews was to set standards in the realm of spirituality and piety, and not to excel in military might or the mastery of high technology as a driver of force, as the Zionists proclaim. All in all Judaism is all about spirituality and piety while Zionism is about racism and expansionism.Summary:
1.Judaism describes the Jewish faith. Zionism defines the philosophy behind an exclusive Jewish state.
2.All Zionist are Jews, but not all Jews are Zionists.
3.Judaism is more about spirituality but Zionism is more about racism.
Tweet