Posted by tin Posted on 12:10 AM with No comments 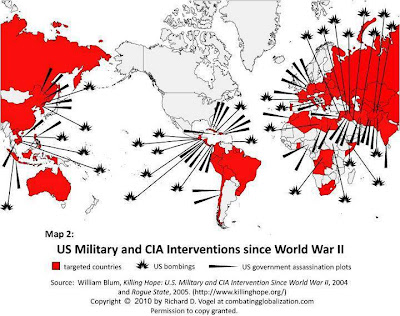 Since the end of the Second World War, the United States of America has attempted to overthrow more than 50 governments, most of which were democratically-elected.
[1]Attempted to suppress a populist or nationalist movement in 20 countries.[2]Grossly interfered in democratic elections in at least 30 countries.
[3]Dropped bombs on the people of more than 30 countries.
[4]Attempted to assassinate more than 50 foreign leaders.
[5]In total: Since 1945, the United States has carried out one or more of the above actions, on one or more occasions, in the following 69 countries (more than one-third of the countries of the world):

"The US are by far the most violent nation on earth. They are the largest producer and exporter of weapons of mass destruction and have the world's biggest military budget comprising 36 percent of the total world military spending.

The media has told us repeatedly that some Middle Easterners hate the U.S. only because of "freedom" and "prosperity." Missing from this explanation is the historical context of the U.S. role in the Middle East, and for that matter in the rest of the world. This basic primer is an attempt to brief readers who have not closely followed the history of U.S. foreign or military affairs, and are perhaps unaware of the background of U.S. military interventions abroad, but are concerned about the direction of our country toward a new war in the name of "freedom" and "protecting civilians."

The United States military has been intervening in other countries for a long time. In 1898, it seized the Philippines, Cuba, and Puerto Rico from Spain, and in 1917-18 became embroiled in World War I in Europe. In the first half of the 20th century it repeatedly sent Marines to "protectorates" such as Nicaragua, Honduras, Panama, Haiti, and the Dominican Republic. All these interventions directly served corporate interests, and many resulted in massive losses of civilians, rebels, and soldiers. Many of the uses of U.S. combat forces are documented in A History of U.S. Military Interventions since 1890:
Tweet