THE MYSTERY OF GIZA PYRAMID

Posted by tin Posted on 6:47 PM with No comments 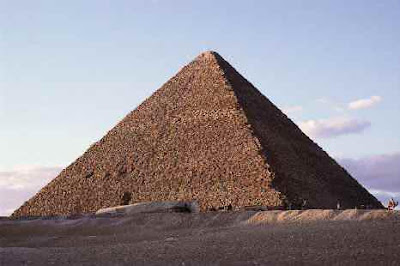 According to ancient alien theorists, extraterrestrials with superior knowledge of science and engineering landed on Earth thousands of years ago,
sharing their expertise with early civilizations and forever changing the course of human history. But how did this concept develop, and is there any evidence to support it?

Some ancient alien theorists believe that visitors from other planets helped humans build architectural wonders like Egypt's Giza Pyramid. Not only is Giza an incredible feat of engineering for its time, but it lies at the intersection of the longest lines of latitude and longitude.

Ancient alien theory grew out of the centuries-old idea that life exists on other planets, and that humans and extraterrestrials have crossed paths before. The theme of human-alien interaction was thrust into the spotlight in the 1960s, driven by a wave of UFO sightings and popular films like 2001: A Space Odyssey. The space program played no small part in this as well: If mankind could travel to other planets, why couldn’t extraterrestrials visit Earth?

In 1968, the Swiss author Erich von Däniken published Chariots of the Gods?, which became an immediate bestseller. In it, he put forth his hypothesis that, thousands of years ago, space travelers from other planets visited Earth, where they taught humans about technology and influenced ancient religions. He is regarded by many as the father of ancient alien theory, also known as the ancient astronaut theory.

Most ancient alien theorists, including von Däniken, point to two types of evidence to support their ideas. The first is ancient religious texts in which humans witness and interact with gods or other heavenly beings who descend from the sky—sometimes in vehicles resembling spaceships—and possess spectacular powers. The second is physical specimens such as artwork depicting alien-like figures and ancient architectural marvels like Stonehenge and the pyramids of Egypt.

If aliens visited Earth in the past, could they make an appearance in the future? For ancient alien theorists, the answer is a resounding yes. They believe that, by sharing their views with the world, they can help prepare future generations for the inevitable encounter that awaits them.
Tweet