Posted by tin Posted on 6:45 PM with No comments 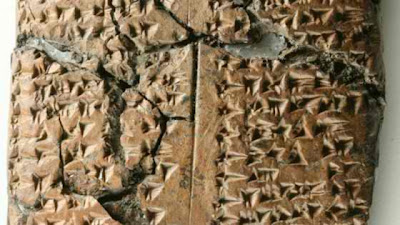 Evidence for a previously unknown ancient language, which dates back more than 2,500 years to the time of the Assyrian Empire, has been found by archaeologists working in Turkey.

Researchers working at Ziyaret Tepe, the probable site of the ancient Assyrian city of Tushan, believe that the language may have been spoken by deportees originally from the Zagros Mountains, on the border of modern-day Iran and Iraq, a release from the University of Cambridge today said.

In keeping with a policy widely practised across the Assyrian Empire, these people may have been forcibly moved from their homeland and resettled in what is now south-east Turkey, where they would have been set to work building the new frontier city and farming its hinterland, the release added.

The evidence for the language they spoke comes from a single clay tablet, which was preserved after it was baked in a fire that destroyed the palace in Tušhan at some point around the end of the 8th century BCE.

Inscribed with cuneiform characters, the tablet is essentially a list of the names of women who were attached to the palace and the local Assyrian administration.

Writing in the new issue of the Journal Of Near Eastern Studies, Dr John MacGinnis, from the McDonald Institute for Archaeological Research, University of Cambridge, explains how the nature of these names has piqued the interest of researchers.

MacGinnis said: “Altogether around 60 names are preserved. One or two are actually Assyrian and a few more may belong to other known languages of the period, such as Luwian or Hurrian, but the great majority belong to a previously unidentified language.”

“If the theory that the speakers of this language came from western Iran is correct, then there is the potential here to complete the picture of the world’s first multi-ethnic empire,” he said.

“We know from existing texts that the Assyrians did conquer people from that region. Now we know that there is another language, perhaps from the same area, and maybe more evidence of its existence waiting to be discovered,” he added.

Ziyaret Tepe is on the River Tigris in south east Turkey, and has been the subject of extensive archaeological excavations since 1997. Recent work has revealed evidence that it was probably once the site of the Assyrian frontier city of Tušhan.

In particular, it is thought that the remains of a monumental building excavated on the site are those of the governor’s palace, built by the Assyrian King Ashurnasirpal II (883 – 859 BCE).

When a conflagration destroyed the palace, perhaps around the year 700 BCE, the tablet was baked and much of its contents on the obverse side preserved.

MacGinnis was handed the task of deciphering the tablet and has identified a total of 144 names, of which 59 can still be made out. His analysis systematically rules out not only common languages from within the Assyrian Empire, but also other languages of the time – including Egyptian, Elamite,Urartian or West Semitic.

Even at its most generous, his assessment suggests that only 15 of the legible names belong to a language previously known to historians, the release added.
Tweet