Posted by tin Posted on 7:03 PM with No comments 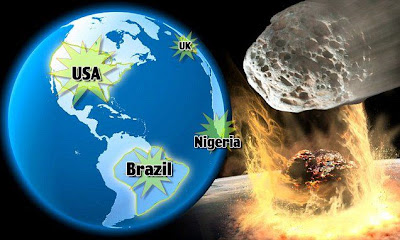 REVEALED: The top 10 countries likely to be worst hit by an asteroid impact are China, Indonesia, India, Japan, the U.S, the Philippines, Italy, the U.K, Brazil and Nigeria.
About 4,700 asteroids of 100 meters diameter and larger represent significant threat to Earth in case of orbit intersection, a recent NASA report suggests. And only 30 per cent of them have been located so far, while the rest remain under the radar.

Potentially hazardous asteroids (PHAs) are those massive enough to pass through Earth’s atmosphere without burning to dust and smash to the ground, causing widespread damage.

Intersection of a PHA’s orbit with Earth’s could potentially lead to a destructive collision, the scale of which depends solely on the size of space rock and its composition (considering that we rule out the possibility of Armageddon movie-style Earth-saving scenario).

Detection of such PHAs and estimates of the treat they pose is one of the main parts of NASA’s WISE mission.

The orbits of almost 5,000 PHAs (give or take 1,500) were discovered to lie within a relatively small 8-billion-kilometer range from our planet. Using the infrared light spectrum, the WISE space telescope was able to detect both light and dark objects, estimate the objects’ real size and make predictions about their structure.

The new estimate is much more credible than NASA’s previous rough results. However, so far only about 30 per cent of PHA objects have been discovered. The rest exist only on paper, though their possible orbits have been calculated.

“We have many more to find, and it will take a concerted effort during the next couple of decades to find all of them that could do serious damage or be a mission destination in the future," said program NASA’s executive for the Near-Earth Object Observation Program, Lindley Johnson.

Moreover, the new analysis suggests that there are twice as many low-inclination asteroids than previously estimated. Low inclination orbit means that asteroid will approach closer to Earth, making it easier (if that word can be used in connection with space exploration) to send manned or automatic missions.

Space missions to asteroids and development of their mineral riches are indeed heating the minds of scientists and businessmen.

US-based company Planetary Resources is already developing know-how methods for harvesting gold, platinum, rare earth metals on the near-Earth asteroids. Their first demonstration orbital mission may be sent as early as in 18 to 24 months.

Scientists have also drawn up a league table of the countries which will be worst affected in the event of an asteroid strike.

They have identified for the first time those which will suffer catastrophic loss of life or be so crippled it will be almost impossible for them to recover.

The list has been compiled by researchers from the University of Southampton using software called called NEOimpactor, short for NASA's ‘NEO’ or Near Earth Object programme.

Overall the top ten countries most at risk are: China, Indonesia, India, Japan, the U.S, the Philippines, Italy, the U.K, Brazil and Nigeria.
Tweet