Home » History , Religion » THE LEGEND AND HISTORY OF ANCIENT OBELISK

THE LEGEND AND HISTORY OF ANCIENT OBELISK

Posted by tin Posted on 7:01 PM with No comments 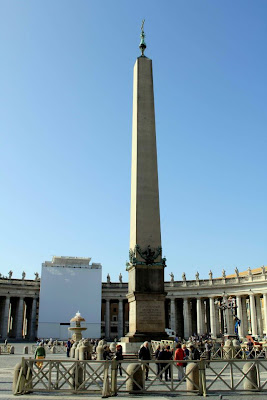 The creation legend relates to the Sun God Ra (as Atum) who rose in the beginning from the primeval ocean called Nun to the first, conical-shaped, mound of earth.

The first rays of the sun fell on Ra marking the way to heaven by ascending the rays of the sun. The original mound of earth was called the benben which was said to be a conical shape (like an obelisk) and four-sided (like a pyramid). The sacred benben stone was worshipped in the ‘Mansion Of The Phoenix’ the Great Sun Temple at Heliopolis. The legend of the Benben Stone could have led to architectural concept of the obelisk and the pyramid. The pointed pyramid-shaped cap on an obelisk is, in fact, called a Benbenet or a pyramidion. The Pyramid and the obelisk are interesting concepts in respect of the Sun God Ra.

The obelisk pointing upwards towards the sun and the pyramid as a material representation of the rays of the sun. It is easy to imagine how an ancient Pharaoh would see the association of the obelisk, pyramid and the sun and how the structure could be a means whereby the dead king could ascend to heaven.

The Ancient Egyptians believed that the obelisk symbolized the sun god Ra and during the brief religious reformation of Akhenaten was said to be a petrified ray of the aten, the sundisk. It was also thought that the god existed within the structure of the obelisk. Obelisks therefore marked specific temples as a zone of sun worship. Obelisks were placed in pairs before the temples with one on either side of the portal. On each side of the obelisk a line of carved inscriptions of hieroglyphics containing the titles of the Pharaoh and praising the god. The cap, or pyramidion, was sometimes sheathed with copper or another metal which caught and reflected the rays of the sun.
Tweet