Home » Illuminati » THE UNITED NATIONS IN A NEW WORLD ORDER

THE UNITED NATIONS IN A NEW WORLD ORDER

Posted by tin Posted on 10:02 PM with No comments 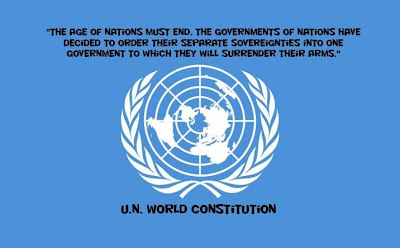 There is a worldwide conspiracy being orchestrated by an extremely powerful and influential group of genetically-related individuals (at least at the highest echelons)
which include many of the world's wealthiest people, top political leaders, and corporate elite, as well as members of the so-called Black Nobility of Europe (dominated by the British Crown) whose goal is to create a One World Government, stripped of nationalistic and regional boundaries, that is obedient to their agenda. Their intention is to effect complete and total control over every human being on the planet.

The concept of a one-world government is not new. Winston Churchill said, “The creation of an authoritative world order is the ultimate aim toward which we must strive,”i and Charles De Gaulle was convinced that “Nations must unite in a world government or perish.”ii

Just like the religious unity movement, the world government movement has the underlying purpose of increasing the power of the Papacy. Historian and author Bill Hughes explains:

The Jesuits failed in their attempts to have a world governing body following World War One. They accomplished their sinister goal after World War Two. Following the war, the weary, aching world was conditioned to accept an international government, and the United Nations was born. Since the creation of the United Nations in 1945, this so-called ‘peace-keeping’ body has failed miserably in keeping peace around the world. Why? Because keeping peace is not their purpose, even though they continue to claim that it is. There are presently some 83 different wars around the world. However, it has certainly been instrumental in suppressing liberty loving people. Katanga and Rhodesia are just two examples of nations crushed by U. N. forces. The United Nations has worked tirelessly to restore the temporal power of the papacy — its purpose from the beginning

Modern Humanism, a movement that promotes equality, human rights, and the opinion that "No deity can save us, we must save ourselves,"iv says this in its 1973 Manifesto II:

We deplore the division of humankind on nationalistic grounds. We have reached a turning point in human history where the best option is to transcend the limits of national sovereignty and to move toward the building of a world community...we look to the development of a system of world law and a world order based upon transnational federal government.

Since World War II, the United Nations have been one tool used to promote the global agenda.

The UN Charter was drawn up in 1945 in San Francisco, under the leadership of mainly Americans including Alger Hiss, the UN Secretary-General. Hiss was accused of being a communist and a Soviet spy—which he denied. He was later convicted of perjury and spent 44 months in prison for his crimes.ix

THE UNITED NATION COMMUNISTS ROOT
The United Nations Charter itself, according to researcher David Rivera, is patterned "after the Constitution of Russia, and the Communist Manifesto."x Writer Des Griffin says that "the Constitution of the U.S.S.R. is almost identical to the Constitution of the UN."xi
It is worth noting that the United States—a key capitalist nation—not only signed this Communist-leaning Charter but was instrumental in forming the ideas and language that make up this socialistic document.

We should not think that a new world order will only happen in the distant future. A socialist global government is already starting to form. In his book En Route to Global Occupation, Gary Kah shows us that the World Constitution and Parliament Association (WCPA) has already created a global constitution: "The Constitution of the Federation of Earth."xii

Even this Constitution itself declared that we are on the verge of a new world order:

Humanity today has come to a turning point in history and that we are on the threshold of an new world order which promises to usher in an era of peace, prosperity, justice and harmony.
Tweet