Posted by tin Posted on 7:12 PM with No comments 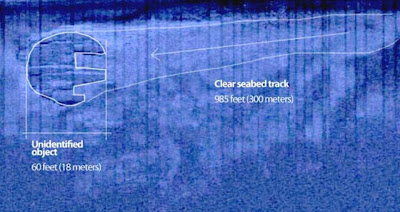 The divers exploring a 'UFO-shaped' object at the bottom of the Baltic Sea say their equipment stops working when they approach within 200m.

Professional diver Stefan Hogerborn, part of the Ocean X team which is exploring the anomaly, said some of the team's cameras and the team's satellite phone would refuse to work when directly above the object, and would only work once they had sailed away.

He is quoted as saying: 'Anything electric out there - and the satellite phone as well - stopped working when we were above the object.
'And then we got away about 200 meters and it turned on again, and when we got back over the object it didn’t work.'

Diver Peter Lindberg said: 'We have experienced things that I really couldn’t imagine and I have been the team's biggest skeptic regarding these different kind of theories.
'I was kind of prepared just to find a stone or cliff or outcrop or pile of mud but it was nothing like that, so for me it has been a missing experience I must say.'
Member Dennis Åsberg said: 'I am one hundred percent convinced and confident that we have found something that is very, very, very unique.
'Then if it is a meteorite or an asteroid, or a volcano, or a base from, say, a U-boat from the Cold War which has manufactured and placed there - or if it is a UFO..

'Well honestly it has to be something.'
The quotes were first reported at NDTV. The Mail Online has reached out to the Ocean X team for clarification.

The object was first found in May last year, but because of a lack of funding and bad timing, they have were not able to pull a team together to see for themselves - just the strange, metallic outline, and a similar disk-shaped object about 200 metres away.
During their visit, the team saw a 985-foot trail that they described 'as a runway or a downhill path that is flattened at the seabed with the object at the end of it'.

As it was before the recent dive, the story behind the object is anyone's guess, from a 'plug to the inner world' to the Millennium Falcon ship from Star Wars.

While the Ocean Explorer team is understandably excited about their potentially earth-shattering find, others are slightly more sceptical and are questioning the accuracy of the sonar technology.
In the past, such technology has confused foreign objects with unusual- but natural - rock formations.

Part of the trouble they face, however, is that they have no way of telling what is inside the supposed cylinder- whether it is filled with gold and riches or simply aged sediment particles.
They're hoping for the former, and history seems to be in their favour.

The Baltic Sea is a treasure trove for shipwreck hunters, as an estimated 100,000 objects are thought to line the cold sea's floor.
The company have created a submarine that they hope will appeal to tourists and wannabe shipwreck hunters who will pay to take a trip down to the bottom of the Baltic Sea to see for themselves.
A further dive will take place in the coming weeks.
Tweet