PETRUS ROMANUS: THE LAST POPE BEFORE THE DESTRUCTION OF HOLY ROMAN CHURCH.

Posted by tin Posted on 7:16 PM with No comments 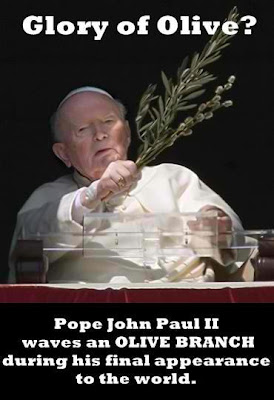 Though there are some disputes over the exact attribution and date of the visions, fact is that this document was finally published in 1590.

In the prophesy Malachy give an key to indicate all the Popes that will head the Vatican after that day until the end - 111 or 112 various Popes.

Regardless many people stamping on a minute point of detail it is very cunning to see how accurate that prophesy is and was. At least we know there were various printed documents the survived over at least this past 400 years which does corresponds to at least this last 35 Popes. Therefore we would rather argue the authenticity of that document.

You can find a good table of this prophesy and links to the various Popes at: http://en.wikipedia.org/wiki/Prophecy_of_the_Popes

or by Google "Pope Prophesy Malachy". It is very interesting to read that page and follow the links to see more details of the various Popes through these ages.

This is best fitting to Pope John Paul II - On the day and hour of his birth there was a Solar Eclipse in the Southern Hemisphere (8 May 1920) and on the day of his funeral (8 April 2005) again a solar eclipse that stretched from New Zealand (Near Christchurch) and ended in Venezuela. Pope John Paul is the most travelled Pope - visiting 129 countries.

On 13 May 1981 John Paul II was nearly fatally wounded by a Turkish gunman. The Pope was hit by four bullets, two of which were serious wounds - lost some 75% blood, went into a coma and was in surgery for over five hours. There is a strange link here - the almost successful assassination attempt took place on 13th day of May - the 88 years to the day and hour when the Secrets of Fatima was given in Portugal (13 May 1917). This is quite important because the Secrets of Fatima does also play a big role in the lives of these last two popes.

Pope John Paul had a few other incidents in his live that might be linked to various other prophesies:

In 1979 he visited the Auschwitz concentration camp in Poland. On 13 April 1986 he was the first ever Pope to visit a Jewish Synagogue and perform prayers with the Jewish. In March 2000 he visited the Yad Vashem in Israel and made history by being the first Pope to touch the Western Wall of the Solomon Temple and placed a letter in the wall.

Pope John Paul II had no less than eight person-to-person meetings with one of the biggest religious leaders in the world - the Buddhist Dalai Lama; actually their eight meetings was more than any other dignity had audiences with the Pope!

The traditional arch enemy of the Vatican is the Muslim world. Pope John Paul II made considerable efforts to bring these two religions closer. On 6th May 2001 he became the first ever Pope to enter and perform prayers in a Muslim Mosque during a visit to Damascus. He also kissed the Qui'ran.

The last physical appearance of Pope John Paul II was on Sunday 20th March 2005 during the Palm Sunday Mass when the Pope gave a speechless blessing to the people from the window of his bedroom; he held up an ‘olive branch’.

There are only two Popes named by St. Malachy after John Paul II. The first he names Gloria olivae or "The Glory of the Olive." It was long thought that this prophecy meant that this Pope would come from the Benedictine order of priests because the order is also known as the Olivetans. In fact, according to open book, "Saint Benedict himself prophesied that before the end of the world his order, known also as the Olivetans, will triumphantly lead the Catholic Church in its fight against evil." Although Cardinal Ratzinger is not a Benedictine, he chose the name Benedict XVI.

The second will be named Peter, and he may be the last Pope. Malachy's prophecy about Peter says, "In extreme persecution, the seat of the Holy Roman Church will be occupied by Peter the Roman, who will feed the sheep through many tribulations, at the term of which the city of seven hills will be destroyed, and the formidable Judge will judge his people."


Glory of the Olive

Traditionally the Olive represents Peace, Victory, Royalty or Peacemaker. In explaining why Ratzinger choose as his pontifical name Benedict said on 27 April 2005 "Firstly, I remember Pope Benedict XV, that courageous prophet of peace, who guided the Church through turbulent times of war. In his footsteps I place my ministry in the service of reconciliation and harmony between peoples."

"I call upon the Church, in every situation, to persist in esteem for Muslims … If all of us who believe in God desire to promote reconciliation, justice and peace, we must work together to banish every form of discrimination, intolerance and religious fundamentalism." Benedict XVI - Nov 2011

The glory of the Olive might be just a link to the Olive Branch waved by Pope John Paul II from his bedroom window in his last physical appearance to the world. Was that a sign to say "It is time for my successor to come?"

It might also be a link to "Glory of the Olive" (as in After the Glory of the Olive) in which Pope John Paul was really a glorious Peacemaker; and who did indeed visit most of Middle East countries, made serious efforts to establish relationships, peace and equilibrium between Christian, Muslim, Jewish and Buddhism as well as between the Arabian/Israel countries.

There is one very strong link; this is the link we postulate as the main reason for the reference "Gloria oliuæ". Pope Benedict XVI is not an Benedictine; he did never belong to any specific order - but he choose the name of Benedict theby linking him unconditionally with the peaceloving 'Order of St. Benedict' - one of the oldest orders, established in 910AD and often called "Olivtans". An order who has as their motto the OLIVE.

Though it might sound drastic but in some scholars opinion all of this #266 and 267 might just be about the same last and final Pope.

Here is a little discrepancy in that some scholars claims this to be the last pope in the prophesy, other claim there is another pope # 268 "In the extreme persecution of the Holy Roman Church, there will sit Peter the Roman, who will nourish the sheep in many tribulations; when they are finished, the city of seven hills will be destroyed, and the dreadful judge will judge his people. The end".

We are not looking here at the key to the next Pope - we are in fact looking at a summary of all the previous Popes! The Apostle of Jesus - Peter (Petrus) was also named as "On this rock I will build my church, and the gates of Hell will not prevail against it." It is generally accepted (and proven) that the 'See of Rome' - which later became the Roman Catholic Church was in fact founded by Peter and Paul.

Ever since - all 267 Popes (and in some cases the Anti-Popes) are said to be the carriers of the Primacy of Peter. They are the ones who is said to be the heirs of the blessings that was passed onto the Apostle Peter; the rock on which Jesus build his church, Peter was given the Keys of the Kingdom of Heaven (Authority). In John 21:15-17 Jesus instructed Peter three times to "feed His sheep" and "feed His lambs."

The Pope of the Holy See in Rome, the one who is sitting as head of the Vatican - he was and is "Petrus Romanus". 267 times. Now let us look again at the last prophesy:

"In the extreme persecution of the Holy Roman Church, there will sit Peter the Roman, who will nourish the sheep in many tribulations; when they are finished, the city of seven hills will be destroyed, and the dreadful judge will judge his people. The end".

It can be interpreted like this : "For centuries the Roman Catholic Church will suffer persecution, opposition - physical and spiritual. Throughout all of this there will be a Pope "Petrus Romanus" leading the church who will nourish (promote) the sheep(people) through many tribulations (sufferings and opposition) - spiritual and physical. Is it not true to this day that the Roman Catholic Church and all the missions all over the world are actually the biggest supported and supplier of food, water, living requirements for billions of people? You find them in all of the poorest regions; they are present where the rest of the world has forgotten there is a place.

(1903-14): This Pope had a number of prophetic visions. In 1909, in the midst of an audience with members of the Franciscan order, he seemed to fall into a trance. Moments passed, then his eyes sprung open and he jumped to his feet. "What I have seen is terrifying!" he cried out. "Will I be the one, or will it be a successor? What is certain is that the Pope will leave Rome and, in leaving the Vatican, he will have to pass over the dead bodies of his priests!" It's uncertain what this vision alluded to, but it is similar in many respects to the reported third prophecy of Fatima. Later, shortly before his death, another vision came to him: "I have seen one of my successors, of the same name, who was fleeing over the bodies of his brethren. He will take refuge in some hiding place; but after a brief respite, he will die a cruel death. Respect for God has disappeared from human hearts. They wish to efface even God's memory. This perversity is nothing less than the beginning of the last days of the world."
Tweet