Posted by tin Posted on 4:00 AM with No comments 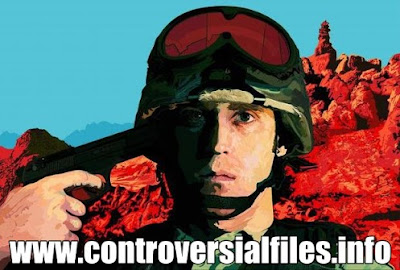 We are living in an age of upside-downs, where right is wrong, fiction is truth and war is peace. Those who fight the wars are subjected to their own house of mirrors via pharmaceutical "treatments."
Instead of providing U.S. soldiers and veterans with actual health care, the government throws pills at them and calls it "therapy."
Stimulants, antidepressants, anti-psychotics, sedatives and pain meds are the new "fuel" for America's front-line forces. While the idea of sending medicated soldiers into battle was unthinkable just three decades ago, today it's the status quo. And the cost in human lives has never been more tragic.Here are 25 disturbing facts about psych drugs, soldiers and suicides. They are disturbing because everybody seems to be pretending there is no link between psychiatric drugs and soldier suicides. So soldiers and veterans keep dying while the Pentagon (and the VA) keep pretending they don't know why. (Sources are listed at the bottom of this article.)1) 33% of the U.S. Army is on prescription medications, and nearly a quarter of those are on psychotropic drugs2) In 2010, the Pentagon spent $280 million on psychiatric drugs. That number has since risen.3) There are now over 8,000 suicides each year by U.S. soldiers and veterans; that's over 22 a day4) 33% of those suicides are attributed to medication side effects5) That means medications are killing more U.S. soldiers and veterans than Al-Qaeda6) 500% more soldiers abuse prescription drugs than illegal street drugs7) Under the Obama administration, the number of veterans waiting for VA care has risen from 11,000 in 2009 to 245,000 today8) More active duty soldiers die from suicide than from combat: 349 dead last year9) The number of prescriptions for Ritalin and Adderall written for active-duty soldiers has increased 1,000% in the last five years10) For every active-duty service member who dies in battle, 25 veterans die by suicide11) Only 1 percent of Americans have served in the Middle East, but veterans of combat there make up 20% of all suicides in the United States12) The suicide rate of active-duty soldiers in the Civil War was only 9 - 15 per 100,000 soldiers. The suicide rate of active-duty U.S. soldiers in the Middle East is 23 per 100,000. And casualty rates were far higher in the Civil War, meaning the Civil War was more psychologically traumatic.13) In the Korean War, the suicide rate among active-duty military soldiers was only 11 per 100,00014) To date, the Pentagon has spent more than a billion dollars on psychiatric drugs, making it one of the largest customers of Big Pharma15) In 2010, over 213,000 active-duty military personnel were taking medications considered "high risk" by the Pentagon16) In the years since the Iraq War began, twice as many soldiers of the Texas Army National Guard have died of suicide than in combat17) Defense Secretary Leon Panetta calls military suicides an "epidemic"18) Of all the branches of the military, the Army has the highest number of suicides each year, almost 400% more than the Marines19) Most active-duty soldiers who take psychiatric medications consume a combination of three to five prescriptions20) The use of prescription medications by active-duty soldiers is largely unregulated. Soldiers are given a bottle of meds and sent into combat. If they run out of meds, they are given a refill, no questions asked.21) The mainstream media says the answer to lowing suicides of veterans is to take away their guns so that they cannot shoot themselves. This is the logical equivalent to trying to fix your car's engine by removing the "check engine" light.22) The Pentagon is initiating new research (in 2013) to try to figure out why psychiatric medications cause soldiers to commit suicide. The research involves tracking brain activity by attaching electrodes to the skull.23) One-third of military suicides are committed by soldiers who have never seen combat24) In the last year, the military wrote over 54,000 prescriptions for Seroquel to soldiers, and all those prescriptions were "off label," meaning the intended use has never been approved by the FDA as safe or effective.25) Dr. Bart Billings, a retired Army Colonel and former military psychologist, refers to psychiatric drugs as a "chemical lobotomy" for soldiers.
Tweet