Posted by tin Posted on 10:35 PM with No comments 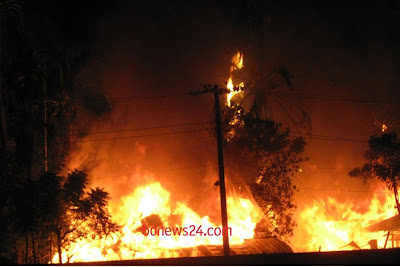 Islamic activists have attacked dozens of Hindu temples and homes across Bangladesh since an Islamist leader was sentenced to death last month,
a Hindu group said Wednesday.

The Bangladesh Puja Udjapon Parishad, an ISKCON-affiliated group that looks after Hindu temples, said 47 temples and at least 700 Hindu houses had been torched or vandalised since the verdict against Delwar Hossain Sayedee.

Sayedee, vice-president of the country’s largest Islamic party Jamaat-e-Islami, was sentenced to hang on February 28 for crimes committed during the 1971 liberation war.

Kazal Debnath, vice-president of the Parishad, blamed the attacks on the Jamaat and its student wing Islami Chhatra Shibir. “We also accuse the government, the police… of failing to protect the temples and our community,” he said.

Home minister Mohiuddin Khan Alamgir responded by saying that the government has taken “enough measures” to protect the minorities.

The Jamaat has denied any role in the attacks, but foreign minister Dipu Moni said last week that Jamaat and Shibir attacked Hindu temples and houses in a “pre-planned manner”.

On her part, Bangladesh Nationalist Party leader Khaleda Zia, whose party is an ally of the Jamaat, condemned the attacks and demanded a “neutral” investigation.

Animesh Sarkar, an ISKCON representative in Dhaka, said Hindus in Bangladesh fear that “things will get much worse in three months when the (Sayedee death) sentence is scheduled to be carried out”.

Hindus, who make up nearly 10% of Bangladesh’s 153 million population, are traditionally seen as supporters of the ruling Awami League.