Posted by tin Posted on 10:33 PM with No comments 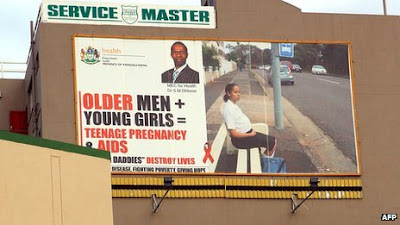 At least 28% of South African schoolgirls are HIV positive compared with 4% of boys because "sugar daddies" are exploiting them,
Health Minister Aaron Motsoaledi has said.
He said 94,000 schoolgirls also fell pregnant in 2011, and 77,000 had abortions at state facilities, The Sowetan newspaper reports.
About 10% of South Africans are living with HIV, official statistics show.

Mr Motsoaledi has been widely praised for his efforts to curb the disease.

The number of HIV-positive people receiving life-saving ARV drugs more than doubled from 678,500 to 1.5 million after he took office, according to official statistics.

The government of former President Thabo Mbeki, who questioned the link between HIV and Aids, had argued it could not afford to roll out this treatment to all the South Africans who needed it.

Speaking at a public meeting in the town of Carolina in South Africa's Mpumalanga province, Mr Motsoaledi said the large number of young girls who were HIV-positive "destroyed my soul".

"It is clear that it is not young boys who are sleeping with these girls. It is old men," The Sowetan quotes him as saying.

"We must take a stand against sugar daddies because they are destroying our children."

"[About] 77 000 girls had abortions at public facilities. We can no longer live like that. We want to put an end to it," he said.

More than five million people in South Africa are HIV-positive - about 10% of the total population.

Last year more than 260,000 people with Aids died - almost half the figure of all those who died in the country.