Home » food , health » Doctors warn public not to touch ‘Soup No. 7’ made from fetus

Doctors warn public not to touch ‘Soup No. 7’ made from fetus

Posted by tin Posted on 11:29 PM with No comments 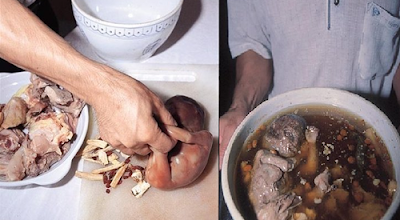 The Department of Health (DOH) has warned people on the new tablet pills called “soup number 7″
from China for it contains stem cell which is taken from aborted fetus.

”Soup number 7″ is contained in a tablet-like medicine which is dissolved with hot water to become a soup. The warning came after reports said that the “soup” is already in the Philippines, and is being sold illegally.

The stem cell from aborted fetus is said to be an aphrodisiac, which, when absorbed by the body, increases and improves one’s libido, or sex drive. Stem cell therapy is becoming popular in the country as a cure fordegenerative diseases or for cosmetics purposes. Stem cells are suppose to be injected by doctors in their patient’s bodies and are not in a form of pills, lotions, soaps etc. Clinics should be accredited first by the Department of Health (DOH) before they could offer stem cell therapies to their patients.

Before “soup number 7,” there was a “soup number 5″ which some consumers swear by as an effectiveaphrodisiac. Its key ingredient is bull testicle.