Posted by tin Posted on 4:07 PM with No comments 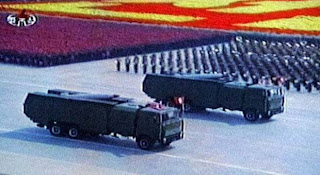 
“North Korea test-launched a short-range missile in the East Sea [Sea of Japan] this afternoon, amid the ongoing security crisis on the Korean peninsula following Pyongyang’s third nuclear test last month,” Yonhap news said.
The source, Yonhap said, was a military source within the South Korean government. The North Korean military launched two KN-02 short-range missiles into international waters, the report said.
KN-02 missiles are mobile missiles. Based on the Soviet-era OTR-21 Tochka, they are launched from the back of SCUD-like trucks (see above headline image) and, of all North Korean missiles, they have the shortest range, as the above BBC infographic shows.
The short-range missile is a domestic variant of the Syrian ‘Scarab A’ missile, and has a range of 120-140km. It is usually used to take out large building targets and, when miniaturized, can carry a small, tactical, nuclear load.
This is not a ’rocket’ test or ICBM launch, and this is not the first time North Korea has tested this particular short-range missile. Pyongyang has reportedly been ‘test-launching’ the same missile from its East Sea [Sea of Japan] coast since 2004, and other launches were detected in 2005, 2006 and 2007.
Like the rest of the North Korean missile program, the KN-02 is based on old Soviet technology (in this case the reverse engineered 9K79 Tochka provided to North Korea by Syria in 1996).  However, what separates the the KN-02 from the rest of the North’s missile arsenal is that it uses solid-fuel, is more accurate than the notoriously inaccurate SCUD derivatives, and is road mobile.
The KN-02 allegedly also flies a cruise missile profile, making it difficult for PATRIOT missile batteries located in South Korea to intercept. If fired from close enough to the DMZ, it could target U.S. military installations in the ROK.
The question today, however, is timing. With tensions at boiling point, today’s launches will get a lot more attention than normal. John Swenson-Wright senior lecturer in East Asian International Relations at the University of Cambridge told NK NEWS  earlier today “the danger of uncontrolled escalation in this situation seems real and therefore something to be managed very very carefully.”
“The real problem is one of miscalculation and misjudgement by either side – with the North believing it can risk a provocation comparable to the 2010 Yeonpyeong shelling, and the South determined to respond decisively.”
nknews.org