Home » news » Kim Jong Un declares his target, and South Korean government tells its citizens not to worry. (Currently the malls are filled with people buying food and survival kits in preparation for war.)

Kim Jong Un declares his target, and South Korean government tells its citizens not to worry. (Currently the malls are filled with people buying food and survival kits in preparation for war.)

Posted by tin Posted on 1:17 AM with No comments 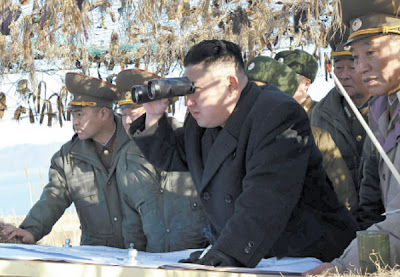 Kim inspected Monday the Wolnae Islet Defense Detachment and another long-range artillery unit under the North Korean People’s Army’s 641 unit and said their target was South Korean naval forces on Baengnyeong Island near the western maritime border, the North Korean media reported yesterday. Wolnae Islet is just 11 kilometers (6.8 miles) away from Baengnyeong, the South’s northernmost island. “The reason for my visit is to finalize the order of attacks and the focus of firepower,” Kim was quoted as saying by the Rodong Sinmun. “When I give an order, you should fire the first gunshots in the grand war to unify our homeland.” His remarks suggested that the South’s five northern islands in the western waters will likely be targets of attack. The area near the western maritime border has been the scene of a series of inter-Korean battles over the past years including the North’s shelling of Yeonpyeong Island in November 2010. According to the Rodong Sinmin, Kim told the soldiers to throw all enemies into a burning cauldron as soon as he gives the order. “Kim confidently said the North can turn Baengnyeong Island into a sea of fire,” the report said. It added the commanders of the Wolnae unit promised to make the South Korean island a grave by reducing it to a sea of fire as they had done with Yeonpyeong. The renewed threats came after South Korean and U.S. forces launched two joint military drills. While Seoul and Washington call the exercises a move to deter the North’s aggression, Pyongyang has denounced it a rehearsal for invasion. Over the past month, North Korea’s young leader has alternated between bellicose threats and military themed trips to outings to enjoy sports events. After its nuclear test on Feb. 12, the North issued a threat to reduce Washington into a sea of fire and wage all-out war against the South. Kim then hosted former NBA basketball player Dennis Rodman in Pyongyang, and the two watched a game together on Feb. 28. On Thursday, Kim visited frontline troops on Mu and Jangjae islets and ordered them to be prepared to destroy enemy targets at a moment’s notice. The unit on Mu islet was responsible for the Yeonpyeong Island shelling. Two days later, the North’s media reported that Kim inspected an indoor basketball court and ordered improvements for the athletes. He also attended an archery game, according to the state media reported. This week, Kim repeated the pattern. He inspected western frontline troops Monday and renewed the line of “sea of fire” threat, according to the North’s media. He also toured the Ryongjong Fish Farm. The report said Kim could not forget his visit to the fish farm accompanying his father, North Korean leader Kim Jong-il two days before the Yeonpyeong Island shelling in 2010. Seoul said yesterday Kim was engaging in psychological warfare to pressure the South, but no immediate sign of an attack was observed. “The North’s state media are repeatedly issuing war threats and escalated rhetoric to put psychological pressure on the South,” Kim Min-seok, spokesman of the South’s National Defense Ministry, said. The North is also creating a mood of war domestically by telling people to move to underground shelters, prepare combat rations and install camouflage covers, Kim said. “With a series of political and military activities, the North seeks to unite its people internally,” Kim said, “while threatening the South and the U.S. to shift their North policies. We hope the South Korean people won’t be agitated by the North’s psychological warfare.” Kim also said no immediate sign of a long-range missile launch or another nuclear test was observed, but the North appeared to be preparing for a massive military drill on the east coast near Wonsan.