Pentagon: F-35 won't have a chance in real combat

Posted by tin Posted on 5:49 PM with No comments 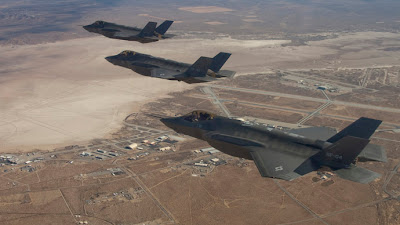 Fatal flaws within the cockpit of the US military’s most expensive fighter jet ever are causing further problems with the Pentagon’s dubious F-35 program.


Just weeks after a fleet of the F-35 Joint Strike Fighters was grounded for reasons unrelated, a new report from the Pentagon warns that any pilot that boards the pricey aircraft places himself in danger without even going into combat.
In a leaked memo from the Defense Department’s director of the Operational Test and Evaluation Directorate to the vice chairman of the Joint Chiefs of Staff, the Pentagon official prefaces a report on the F-35 by cautioning that even training missions cannot be safely performed on board the aircraft at this time.
“The training management system lags in development compared to the rest of the Integrated Training Center and does not yet have all planned functionality,” the report reads in part.
In other sections of the lengthy DoD analysis, Operational Test and Evaluation Directorate Director J. Michael Gilmore outlines a number of flaws that jeopardize the safety of any pilot that enters the aircraft.
“The out-of-cockpit visibility in the F-35A is less than other Air Force fighter aircraft,” one excerpt reads.
Elsewhere, Gilmore includes quotes from pilots commenting after test missions onboard the aircraft:“The head rest is too large and will impede aft [rear] visibility and survivability during surface and air engagements,” said one. “Aft visibility will get the pilot gunned [down] every time” in dogfights, remarked another.
“Aft visibility could turn out to be a significant problem for all F-35 pilots in the future,” the Pentagon admits.
In one chart included in the report, the Pentagon says there are eight crucial flaws with the aircraft that have raises serious red flags within the Department of Defense. The plane’s lack of maturity, reduced pilot situational awareness during an emergency and the risk of the aircraft’s fuel barriers catching fire are also cited, as is the likelihood of a pilot in distress becoming unable to escape his aircraft during an emergency — or perhaps drowning in event of an evacuation over water.
The Pilot Vehicle Interface, or PVI, is also listed as not up to snuff. Documented deficiencies regarding the F-35 pilot’s helmet-mounted display and other aspects of the PVI are named, and the result could mean grave consequences.
“There is no confidence that the pilot can perform critical tasks safely,” the report reads.
The latest news regarding the F-35s comes less than one month after a separate incident forced the Department of Defense to ground their entire arsenal of the fighter jets. In February, jet makers Lockheed Martin issued a statement acknowledging that a routine inspection on a test plane at Edwards Air Force Base in California turned up cracked turbine blade.
“Safety is always our first consideration, and the joint inspection team is focused on ensuring the integrity of the engines across the entire fleet so the F-35s can safely return to flight as soon as possible,” the manufacture told the media. In response, Joint Program Office spokeswoman Kyra Hawn confirmed that all F-35 flight operations were suspended as a precautionary measure “until the investigation is complete and the cause of the blade crack is fully understood.” Just weeks later, though, a new report is already causing fresh problems for the F-35 program.
Each F-35 fighter jet is valued at $238 million and, according to recent estimates, the entire operation will cost the country $1 trillion in order to keep the jets up and running through 2050.