Posted by tin Posted on 4:23 PM with No comments 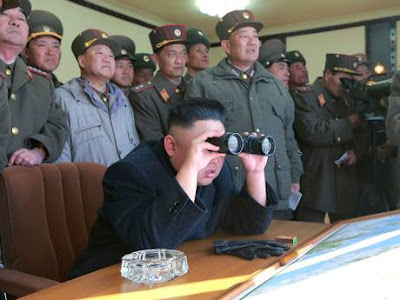 The country's leader Kim Jong-un personally supervised the drill, in a move that is sure to inflame tensions further between the two countries, the KCNA agency said.

The North has stepped up military preparations in response to being sanctioned for its February nuclear test, with the border being seen as the most likely site of any clash.

The country's latest move follows a series of inflammatory statements in which North Korea has threatened a nuclear war with the United States in response to new United Nations sanctions and to strike back at South Korea and the United States during military drills that the two allies are holding.
Kim praised the artillery units on two islands after watching them hit targets, in what KCNA described as the "biggest hotspots in the southwestern sector of the front", in practice for striking at two South Korean islands.

Pyongyang has kept up a steady stream of incendiary rhetoric since moves began to sanction it in the United Nations over its third nuclear test. It was also subject to sanctions for the launch of a long-range test rocket in December that critics say is aimed at proving its long-range missile technology.

The new UN sanctions aim to stifle funding for the North's nuclear and missile programmes and for the ruling Kim dynasty, although much will depend on whether China, the North's main ally, enforces them.

North Korea's claims to be able to stage a nuclear strike on the United States have not been taken seriously by most observers of its missile programme, but it shelled a South Korean island in 2010, causing civilian casualties.
So far, there are few signs beyond Pyongyang's rhetoric that it is preparing for a major conflict.