Posted by tin Posted on 4:28 PM with No comments 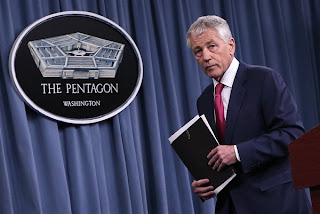 The U.S. is deploying 14 new ground-based missile interceptors in Alaska to counter renewed nuclear threats from North Korea and Iran, Defense Secretary Chuck Hagel said Friday.
The new interceptors will be based at Fort Greely, an Army launch site about 100 miles southeast of Fairbanks, Alaska, and are projected to be fully deployed by 2017, Hagel said. The additions will bring the U.S.-based ground interceptor deployment from 30 to 44, including four that are based in California.

That will boost U.S. missile defense capability by 50 percent and "make clear to the world that the United States stands firm against aggression," he said in a briefing at the Pentagon.


The announcement comes as North Korea has been making bellicose threats to void the armistice that ended the Korean War and launch a nuclear attack on the U.S. The U.S. and South Korea began annual military drills this week despite the North Korean threats.

Hagel said the U.S. would also shift some "resources," which he didn't specify, from the delayed Aegis anti-missile program in Europe to U.S.-based defenses, saying the Aegis program was "lagging" because of reduced congressional funding. And he reiterated previously announced plans to add a second U.S. anti-ballistic missile radar installation in Japan.

Even before the announcement, Sen. Kelly Ayotte, R-N.H., a member of the Armed Services Committee, criticized the news, saying it was too little and too late.

"I applaud the Obama administration's decision, but it shouldn't have taken the predictable saber-rattling from North Korea to bring this about," Ayotte said in a statement Friday.

"Americans living in the Eastern United States should have the same level of missile defense protection as those in the West," she said.