Norway Calls on the World to Ban Nuclear Weapons

Posted by tin Posted on 5:25 PM with No comments 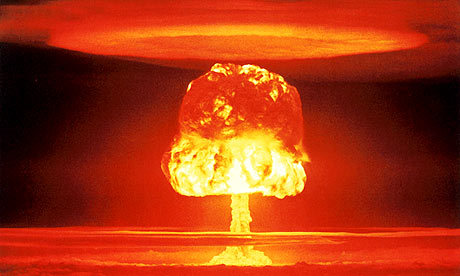 Last week, an extraordinary, historic event occurred. The government of Norway invited all the nations of the world to a two-day conference to discuss the humanitarian effects of nuclear war and to begin the process to ban all nuclear weapons.
Over 130 nations showed up. The gathering was full of hope and energy, and at the end, Mexico announced that it will host a follow-up international gathering.

It's equally amazing how few people know this international gathering even occurred. Of course, the U.S. and Britain did not attend the meeting. They want nothing to do with such peace folk. But despite their efforts, a global abolition movement is growing.

Actor/activist Martin Sheen and I flew to Oslo, Norway to speak at the civic forum before the conference, sponsored by The International Campaign for the Abolition of Nuclear Weapons. We appeared together before an excited crowd of 900 people in downtown Oslo.

Martin began by thanking ICAN for their work to build a global abolition movement, and encouraged everyone to keep at it. He read aloud their general call:

--that any use of nuclear weapons would cause catastrophic humanitarian and environmental harm;

--that there is a universal humanitarian imperative to ban nuclear weapons, even for states that do not possess them;

--that the nuclear-armed states have an obligation to eliminate their nuclear weapons completely;

--and that we need to take immediate action to support a multilateral process of negotiations for a treaty banning nuclear weapons.

During the evening event, we were interviewed together on stage about our work for peace over the last three decades, how we got involved, what we've done, where we get our energy, and what our hopes for peace are. Martin spoke about being in India during the making of the movie Gandhi, and how that experience led to an awakening of his faith, and how meeting Dan and Phil Berrigan who pushed him to work publicly for peace.

On Sunday and Monday, Martin was interviewed by all the leading Norwegian newspapers and television stations just as the international government conference was beginning. Meanwhile, I spoke on a panel on "Ethics in International Politics" with Cardinal John Onaiyekan from Nigeria, who left afterwards for the Vatican conclave in Rome. He spoke passionately against war and nuclear weapons and the need for a deeper spirituality and morality in the world so that these weapons could be disarmed. Liv Torres of Norwegian Peoples Aid urged policy makers in the audience not to wait for the nuclear superpowers but to go ahead and start the process for an international ban on nuclear weapons. I reflected on the need for a new global Gandhian/Christian ethic of nonviolence which would set a standard of using nonviolent means to resolve conflicts instead of resorting to killing, warfare, and weapons of mass destruction.

On Monday evening, we attended a reception with the Norwegian Parliament and were able to encourage many members to carry on their initiative for the abolition of nuclear weapons. We met Norway's foreign minister, the vice president of Parliament, the mayor of Oslo, and many other officials.

Martin and I were particularly impressed by one of the founders of the International Physicians for Social Responsibility who said that for the first time in four decades, he feels hopeful about nuclear disarmament. There has never been such an important gathering in history, he said, and everyone is optimistic that an international ban on nuclear weapons could soon become a reality.

At the international conference, government representatives were challenged to study the humanitarian consequences of nuclear weapons. They examined three areas:

Norway hopes the conference will lead to a process similar to the processes that led to the ban on landmines and cluster munitions, in the 1997 Mine Ban Treaty and the 2008 Convention on Cluster Munitions.

The conference is a real sign of hope for the world, and we congratulated the Norwegian government for taking such strong leadership to promote disarmament.

Each time someone stands up for an ideal or acts to improve the lot of others or strikes out against injustice, they send forth a tiny ripple of hope and crossing each other from a million different centers of energy and daring, those ripples build a current which can bring down the mightiest walls of oppression and injustice.

Last week in Oslo, Norway, Martin and I felt those ripples of hope coming from around the world. We hope a new current will rise up and a tide of peace will ban all nuclear weapons once and for all. Then we can get on with the business of eliminating hunger and poverty.