Posted by tin Posted on 9:42 PM with No comments 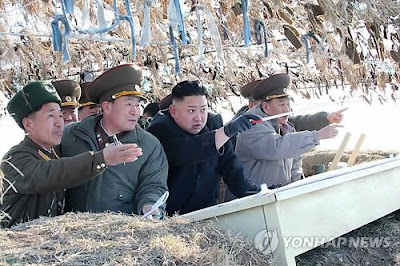 SEOUL, March 14 (Yonhap) -- North Korean leader Kim Jong-un guided artillery exercises that targeted South Korean islands in the Yellow Sea,
the communist country's media reported Thursday.
The Korean Central News Agency (KCNA) report monitored in Seoul said Kim oversaw live ammunition drills to test the capabilities of artillery batteries under real battle conditions. It said that exercises were aimed at the islands of Baengnyeong and Yeonpyeong that lie just south of the Northern Limit Line (NLL) that acts as the de facto sea border between the two Koreas. The North does not recognize the NLL and has tried to impose its own demarcation line that has been rejected by Seoul.

Kim's actions come as Pyongyang put its armed forces on high alert in response to the joint South Korea-U.S. Foal Eagle and Key Resolve military exercises that began in earnest on Monday. It also follows the isolationist country's moves to ratchet up tensions on the Korean Peninsula by unilaterally nullifying the Armistice Agreement that halted the Korean War (1950-53) and claiming all nonaggression pacts between the two countries were null and void. The North on several occasions has threatened to turn Seoul and Washington into a "sea of fire" and boasted it has significant nuclear weapons capability to deal with outside aggressors.The North's official news wire service, meanwhile, did not give the exact date of the exercise or the units involved, but it likely took place on Wednesday, and involved batteries capable of targeting Baengnyeong and Yeonpyeong. It said the North Korean leader, who holds the rank of marshal in the Korean People's Army, was pleased with the level of accuracy of the artillery units.The KCNA said the goal of the exercise was to destroy the headquarters of South Korean Army and Marine Corps units on the two islands as well as other military installations. South Korea has a Harpoon anti-ship missile detachment, multiple rocket launcher systems and 155 millimeter howitzers on the islands, as well as tanks, anti-artillery radar and electronic intelligence gathering posts.The latest report comes as North Korean media gave high profile coverage to Kim visiting several front-line units along the country's southwestern coast that have seen numerous clashes with the South.There have been three naval clashes along the NLL since 1999 in addition to the sinking of a South Korean naval vessel by a North Korean submarine in March 2010 that left 46 sailors dead. The North also shelled Yeonpyeong Island in Nov. 2010, which resulted in four deaths.