Posted by tin Posted on 10:02 PM with No comments 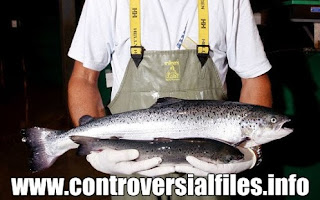 All across the country, people are rising up and demanding that the foods they eat be properly identified and honestly labeled.
And the constituency of the state of Oregon is no exception, where a trio of legislative bills recently introduced would require that all genetically-modified organisms (GMOs) be properly labeled, as well as prohibit the import and sale of GM salmon, the first transgenic animal to ever be preliminarily approved by the U.S. Food and Drug Administration (FDA) for human consumption.H.B. 2175, whose chief sponsor is Representative Deborah Boone (D-Cannon Beach), provisions that all foods containing or made with genetically-engineered (GE) material be properly labeled in the state of Oregon. Any food products made with or containing GMOs that are not properly labeled beginning on January 1, 2014, will be deemed misbranded, and its manufacturer held liable for breaking the state's food labeling requirements.In the same vein, H.B. 2530 prohibits GE salmon not only from being cultivated and farmed within the state of Oregon, but also from being imported and sold there. As we reported in years past, the "Frankensalmon," known officially as "AquAdvantage," was approved by the FDA against the will of the people, and without adequate safety studies proving the fish was safe for human consumption and that it would not contaminate wild fish.In the event that H.B. 2530 is not passed, H.B. 3177 is waiting in the wings as a backup. This bill, which was proposed by both Rep. Paul Holvey (D-Eugene) and Rep. David Gomberg (D-Central Coast), proposes to require that GE salmon be properly labeled. Like H.B. 2175, H.B. 3177 designates that all GE salmon sold without a proper label is misbranded, and thus in violation of the law."Oregon consumers have the right to know whether or not the food they purchase was produced using genetic engineering," states the website OregonRightToKnow.org. "Genetic engineering of plants and animals often causes unintended consequences. Manipulating genes and inserting them into organisms is an imprecise process. The results are not always predictable or controllable, and they can lead to adverse health or environmental consequences."GMOs destroy health, and people want to know where, when they are being used in the food supplyThe Oregon House Committee on Agriculture and Natural Resources recently heard testimony on the three bills. And supporters of GMO labeling throughout the state have been busy spreading the word about the lack of proper GMO safety testing, and the fact that GMOs have been linked to causing organ damage, gastrointestinal problems, allergies, and even cancer.The Center for Food Safety, a nonprofit public interest and environmental advocacy group, says GMO labeling legislation has been proposed in nearly half of all states. And even though a single one has yet to pass, awareness about the presence of GMOs throughout the food supply is growing, and individuals everywhere are saying "Enough!" to all the political gerrymandering being prompted by the biotechnology industry."The profit-driven motives to prohibit GMO labeling are reprehensible and represent an egregious indictment of the current health care system," said Dr. Mary Zesiewicz, a board-certified psychiatrist, to state lawmakers in Colorado during a recent hearing. During her testimony, Dr. Zesiewicz explained that she has "seen an alarming increase in chronic health conditions" at her practice, many of which appear to be linked to GMO consumption.
Tweet