Home » food , health » What are 'food drugs' and how much are you taking?

What are 'food drugs' and how much are you taking? 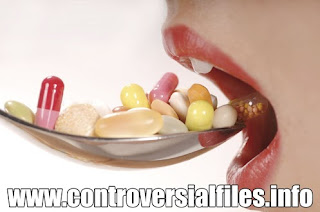 If you took an antibiotic every day, your body would build up immunity to it, and the antibiotics would no longer work.
Just the same, if you were to use drugs, like cocaine or heroine every day, your body would break down, leading your heart and cleansing organs to overwork in order to filter out the toxins and fight off the "pollution," and you would surely see an early grave.
Think about this for a second: what if someone sprayed some ant and roach killer on your kitchen counter, and you saw the spray hit your plate, knife and fork, would you rush to clean them off, before you forgot about it, and ate from them later? Since the bug spray has no scent, you may never taste it, so then would you even know if you did eat it? You might notice later, when you get that horrible upset stomach, or diarrhea, and you might know when you throw up, over and over, as your body tries to purge the toxic concoction of chemicals.Most of the pesticides, insecticides, and herbicides used for conventional farming do not have a smell or taste by the time they reach the mouths of humans, but they are still there, still lurking inside the food (GMO), and they are spread all over the food (conventional). Drugs given to animals remain in their blood and in their body tissue long after death. The chemicals and the drugs (hormones and antibiotics) are still there, and they are still doing damage to your insides when you consume them, but you just don't feel it the very same day... or do you? (http://www.organicauthority.com)Cumulative effect of food drugsQuestion: Why do corporate "feed" animals in America need to get "juiced up" with so many antibiotics? The answer is simple: because they have infections from eating the pesticide-drenched food, from the artificial hormones they are shot up with, and from the horrific conditions they live in from birth to death. When you consume non-organic food, you are "taking" drugs and ingesting chemicals, and it's not just a "little bit" anymore. The cumulative effect today is so overblown, it's almost like you are eating off a drug-laden, bug sprayed "chopping block" every meal. (http://programs.webseed.com/Dont_Eat_Cancer__TV.htm)To top it all off, in the United States, when you get sick, allopathic doctors prescribe chemicals for your food drug illnesses. They give you more genetically altered components to add to the toxic overload from which you suffer. They advise you to get flu shots and vaccines containing aluminum, formaldehyde and monosodium glutamate (MSG). You get antibiotics for that cough, for that sinus infection, for that bronchial infection, for pneumonia, and for all those "disease-like" symptoms. (http://www.ncbi.nlm.nih.gov/pubmed/21568886)If you're driving down the road and the warning lights are blinking yellow and red on the dashboard, do you pull over, cut the wires, and keep driving, or do you drive to the "car doctor" and put in some dirty oil? Make no mistake, pesticides and pharmaceutical drugs, like antibiotics, are dirty oil, and they break down your whole system, day in and day out. Like the old saying goes, "garbage in, garbage out." If you don't want to feel lousy and stay "broken down," then don't eat drugged food. (Check out: "Dead doctors don't lie" at: Dr. Joel Wallach - The Best of Dead Doctors Don't Lie)What food drugs are you eating today?• GMO fed chickens, cows, pigs and turkeys: almost every "chain" restaurant in America serves up the drug meats: If you must eat animals, don't eat the drugged up ones. You do have healthy options! (http://www.tasteofthehawaiianrange.com/grass-fed-101/index.html)• GMO corn based products: check your corn ships, tortillas, cereals, oils, cakes, cookies, pancake and waffle mix, and so on: (http://www.washingtonpost.com)• GMO soy based products: soy milk, tofu, soy burgers, soy sauce, and so on: (http://foodmatters.tv)• Genetically modified canola and cottonseed oil: check every non-organic, generic product you buy for these drug oils! (http://wellnessmama.com)• Drug water: Most water contains antibiotics "processed" by your fellow humans. You must drink spring water or at least water which has been filtered with reverse osmosis. Besides the drugs, most municipal water is laced with fluoride, which causes bone decay and cancer. (http://consumerist.com)Don't drink drug water, don't eat drug food, and if and when you get sick, don't take toxins to quell the symptoms. Call or visit a Naturopathic doctor and do some research on natural remedies. (http://www.naturopathic.org/AF_MemberDirectory.asp?version=2)Food drugs have infiltrated across the country and the world. They remain unlabeled and unchecked by our regulatory agencies. Be careful. Shop with caution and watch out, because there are some surprisingly new arenas for GMO contamination, like GMO salmon, and coming soon to supermarkets near you; GMO trout, tuna and tilapia! (http://sacredhabitats.com)
Tweet