Home » animals » India: We Will Not Allow Dolphinariums

India: We Will Not Allow Dolphinariums

Posted by tin Posted on 8:13 PM with No comments 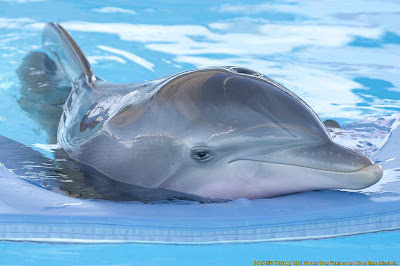 The Indian Ministry of Forests and Environment has released an official statement indicating that dolphin captivity will not be welcome anywhere in the nation.

The anticipated announcement comes on the heels of other recent Indian governmental decisions stating opposition of dolphin captivity. The Ministry's statement that they "have decided not to allow establishment of dolphinarium in the country" will help to discourage any such development from taking place, on the grounds that keeping dolphins captive has been proven as being cruel and morally reprehensible - arguments that have been made by groups such as the Federation of Indian Animal Protection Organizations, Whale and Dolphin Conservation and Humane Society International.

The Ministry notes increasing worldwide efforts to bestow basic rights onto dolphins, such as the rights to life, liberty and bodily integrity. "Various scientists... have suggested that the unusually high intelligence... means that dolphins should be seen as "nonhuman persons" and as such should have their own specific rights... (it is) morally unacceptable to keep them for captive entertainment purposes."

The statement also concedes that cetaceans are "highly intelligent and sensitive " which makes their confinement all the more painful to bear - claims which are backed by years of scientific study. Many dolphins in captivity today are captured from the wild, separated from their family members and are often forced to watch them be slaughtered before their eyes. These traumatic events, compounded with the complete lack of freedom in captivity, take heavy tolls that contribute to shortened lifespans and the proliferation of disease.

The Ministry's decision is lauded by organizations and individuals around the world. Ric O'Barry, director of Dolphin Project applauds India's position: "This is a huge win for dolphins. Not only have they spoken out against cruelty, they have contributed to an emerging and vital dialogue about the ways we think about dolphins - as thinking, feeling beings rather than pieces of property to make money off of."

This decision sets an important precedent that other nations are now challenged to follow. India has solidified their position as a world leader in dolphin welfare.