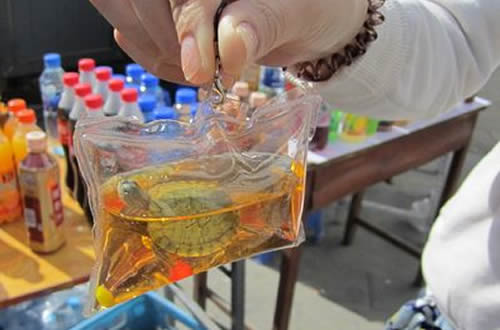 Chinese vendors have been selling pretty depressing keychains that consist of either a Brazil turtle or two small kingfish sealed inside a small plastic baggy. Each baggy, seven centimeters in length, is filled with colored liquid and the imprisoned animal(s) of choice.

The vendors, who sell the baggies at the entrances to subways or train stations, claim the colored water is a “nutrient rich” solution that allows the live creatures shoved inside a seven centimeter bag to live for a few months, after which–if this story couldn’t get any more depressing–the animals die and, according to Helablog, “rumor has it…the cadavers are heated in the microwave for 15 seconds and eaten while enjoying an ice cold beer.”

If the existence of these keychains wasn’t depressing enough, the fact that they’re not illegal makes them even worse, as China only has a Wild Animal Protection Law, under which these keychains do not happen to fall.

Since there is no law preventing the existence of these keychains, so there may not be an end to them anytime soon and, according to the Global Times, the depressing keychain business is doing well, as they reportedly watched one fish keychain and nine turtle keychains sell in five minutes time, to both people who think they’re neat, and others who buy the keychains to free the animals.


According to the cofounder of the International Center for Veterinary Services, Mary Peng, the fish and turtles wouldn’t survive too long in the sealed plastic bag due to the lack of oxygen, regardless of how “nutrient rich” the colored water may be.

Animal protection groups are voicing their opinion on the matter, so hopefully they can quickly make progress toward getting these keychains made illegal.