Home » people » Man Had Pencil On Head For 15 Years

Man Had Pencil On Head For 15 Years

Posted by tin Posted on 10:00 PM with No comments 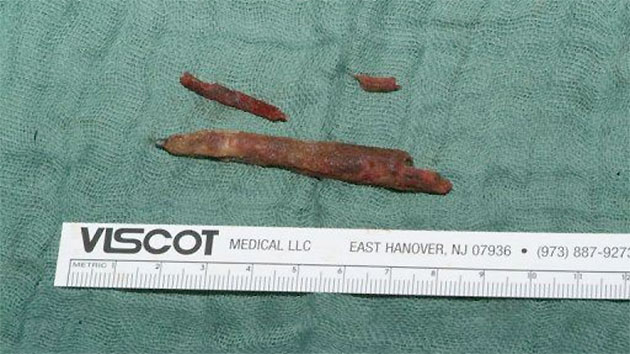 The pencil which was removed from the head of a 24-year-old patient.


An Afghan man unknowingly lived with a pencil in his head for 15 years, according to German doctors who helped crack the curious case.

The man, whose name has not been made public, said he suffered from headaches, colds and worsening vision for years before a scan revealed the 4-inch pencil in a series of cavities behind his right eye, the Associated Press reported.

The man, 24, said he had no idea how the pencil became lodged in his sinuses and pharynx, a passageway between the nasal and oral cavities and the throat, but did recall having a bad fall as a child, according to the AP.

Doctors at Aachen University Hospital in Aachen, Germany, removed the pencil in 2011, but only recently discussed the case publicly at a medical conference.

The man’s case recalls a similar incident earlier this year, when a New Hampshire toddler fell face-first onto an orange pencil-crayon. It became lodged about 5 inches between her right eye and the back of her skull.