Poltergeist: origins of the mysterious phenomenon 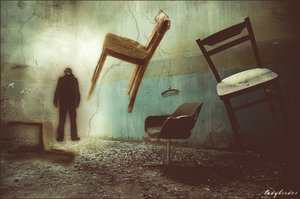 Translated from the German, the word “poltergeist” means “noisy spirit“. Poltergeist is used to describe all sorts of noises and a spontaneous movement of objects around the house without a material cause. The poltergeist phenomenon is studied by parapsychologists. However, modern science takes parapsychology lightly.

But we should not deny that something like this happens. Many homes have their own poltergeists. It is believed that they can not cause physical harm to people, but may have quite a heavy impact on psychological health. Not everyone is ready to accept the fact that he shares his house with an unknown being or spirit that is unpredictable in its actions…

There are not many witnesses who saw poltergeist with their own eyes. Some people have seen things flying around their apartment, others have heard strange creaks and other sounds, and others have heard human speech “performed” by non-human voices. Constant flickering of light, phone calls, creaking doors are the signs of the presence of poltergeists in the house.

Poltergeists also divide into “categories”: they may be both good and bad. There are evil poltergeists which can cause physical harm, classic ones which just make sounds and drop items, and funny ones which “hide” small items such as a spoon or a fork.

Unfortunately, until now, science can not clearly explain the origin of this anomalous phenomenon. Until the twentieth century it was believed that a poltergeist is a soul that can not find peace, or a person who died in this house.

However, Frederick W. Myers (one of the first investigators of the poltergeist) stated that the poltergeist has no relation to spirits and ghosts and is a completely independent phenomenon.

There is a theory that this anomaly is nothing but the machinations of our own psyche. More precisely, it is a “mental projection” of an unhealthy, developing or teenage psyche, which expresses an intensive internal negative energy. Nandor Fodor, the author of this theory, devoted most of his life to the study of poltergeist cases and found that almost in all the houses where strange things were happening, there was an unhealthy psychological atmosphere.

In the middle of the XX century there was another theory, which attempts to explain the phenomenon of poltergeist from the standpoint of physics. Some scientists believe that the ball lightning and this anomaly are phenomena of the same nature. It means that the poltergeist is caused by some natural forces that are not currently understood.

Yet there are no ways to deal with poltergeist. Or better to say, there are some ways, but they do not always help. One of the classic ways is to find a priest and ask him to bless the house. But until now, many people have no choice but to share their home with a being (though it is rather a phenomenon) of unknown origin.