Home » Mystery » Teleportation as a Way of Traveling to Parallel Worlds?

Teleportation as a Way of Traveling to Parallel Worlds?

Posted by tin Posted on 8:25 PM with No comments 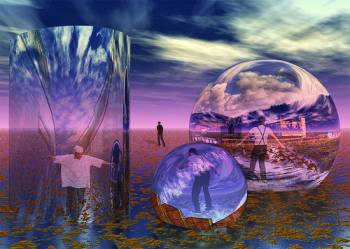 Stories about mysterious travels to parallel worlds are not uncommon. However, these reports often make us think whether these “journeys” to another world have some substance.

It is interesting that for a long time, the scientists have been developing a theory of teleportation, the phenomenon when an object is moved from one place to another in the shortest amount of time. And in 2011, this mysterious phenomenon started manifesting itself again.

In the beginning of 2011, a French scientist Luc Montagnier, who received the 2008 Nobel Prize in medicine, has shocked the scientific world. He managed to beam a DNA sample from one test tube to another. Two separate test tubes were placed next to each other. One had pure water, and the other contained a DNA molecule. The test tube containing the DNA molecule was irradiated. Incredibly, after less than a day, the DNA was found in the test tube with water! Montagnier is convinced that this is only a first step in developing the theory of teleportation.

Interestingly, in addition to radiation, a lot of stress or negative circumstances experienced by a person can have similar effect. And most stories about mysterious travels are related to these events.

One of the ancient Mexican manuscripts contains a story about a sudden appearance of an unknown soldier on October 25, 1593 in Mexico City. According to his story, it was found that his regiment was stationed in the Philippines, 9 thousand miles from Mexico! The soldier claimed that in just a few seconds before his mysterious travel he had been on guard duty at the palace of the governor of the Philippines in Manila and incidentally became a witness to the murder of the governor. The man could not explain how he ended up in Mexico. The Inquisition has sentenced the man to be burned alive. Just a few months after his execution, the soldier’s story was confirmed by merchants who arrived from the Philippines.

Another mysterious event occurred in the Belorussian Military District in 1982. During the flight of the MiG-21 aircraft which took off to monitor the weather, it disappeared from radar screens. The search for the missing aircraft produced no results. But, to the astonishment of aviators, the next morning the fighter had safely landed on the runway of the airfield. It was a complete mystery, but for the pilot the scheduled flight lasted 12 assigned minutes.

In early May of 1968, near the town of Chaskomus (Argentina) right in front of many witnesses, the car with Dr. Gerardo Vidal and his wife had vanished into thin air. Friends and relatives began searching for the car. But neither the doctor nor the car could be found. Two days later, the man made a call himself. He was calling from the Argentine Consulate in Mexico City, which is located 6,400 miles away from the place where his car had disappeared. The Vidals could not explain their mysterious disappearance. However, they recalled a very bright light flashing before their eyes and moments later discovering themselves on a completely unfamiliar route.

A similar case occurred in 1999 with a young Italian man, who was described by American police as mad, and was taken to a psychiatric hospital in New York. The young man was not dressed for the weather and “intimidated” subway passengers by talking to them in an unknown language. However, further investigation revealed that the young man was sane and healthy, but very frightened. The young man claimed that a few minutes earlier, he was coming down the trail to the Tiber River. When he looked at the water, instead of his reflection he saw a bright light, and a moment later he was lying on the cold floor of the American subway.

hese stories are not unique. People were confused and had no clue about what was going on in the past, but today many scientists are inclined to believe in involuntary teleportation. Researchers have come up with a number of theories to explain this phenomenon. The first one was created in 1899 by a science fiction writer Ambrose Bierce from the U.S.

He explains his theory by saying “our space is like a knitted sweater: it can be put on, although, when you look closer, a sweater is full of holes. Suppose, an ant has ended up on the sleeve of the sweater. When it accidentally falls in between the loops, it will find itself in a completely different world, where it is dark and stuffy, and instead of the usual fir needles there is warm, soft skin … “

The second theory, developed by Albert Einstein, relies on the existence of a fourth spatial dimension - time. According to this explanation, the space periodically opens the black holes, through which objects from other worlds can penetrate into our universe.

Einstein’s theory has long been utilized by other experts, the ufologists. They claim that this is how mysterious alien aircraft objects appear on our planet. Ufologists often associate mass human abduction and disappearance events with teleportation. Scientists believe that extraterrestrials have long mastered this technique, if not the ability to open black holes at will, or at least their detection.

According to the third theory by Ralph Harrison introduced in 1938, teleportation follows the laws of meteorology. For example, in the area of Bermuda anomalous zone, the teleportation areas move under the influence of the Gulf Stream. “These events can occur in the atmosphere. When the channels open between worlds, living beings and objects travel through them to a parallel world and come back. Imagine yourself … being a caterpillar that has fallen on a man’s shoe.

Suppose you need to get to the other shoe, a journey through the leg, pelvis, and the other leg which will last at least a day, and it is also dangerous because you can easily fall off. But here is a man who accidentally crossed his legs so that you ended up on the other shoe, having made an instant journey in a matter of a day! “- explains Ralph Harrison.

However, although it is too early to draw any conclusions, recent scientific developments have brought us considerably closer to unlocking the world of one of the greatest mysteries. Perhaps, in the near future mankind will be able to master the art of teleportation.