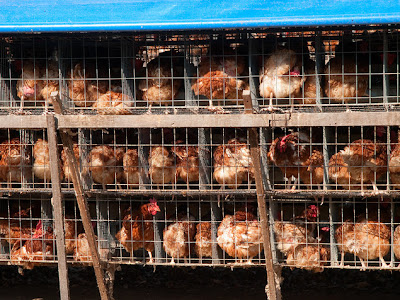 The old saying, "You are what you eat," poses troubling implications for public health in light of a new study on chicken meat, which found that most of it contains dangerously high levels of toxic arsenic. And the worst part is that industrial chicken producers are directly responsible for causing this, as they intentionally add arsenic-based pharmaceutical drugs to chicken feed in order to bulk them up quickly and improve the color of their meat, which in turn poisons you and your family.

You can thank researchers from the Johns Hopkins Center for a Livable Future in Maryland for exposing this little-known fact in a recent paper published in the journal Environmental Health Perspectives. As it turns out, virtually all commercial chicken, including certified organic and "antibiotic-free" varieties, contain some level of inorganic arsenic. But it is the conventional chicken fed arsenic-based drugs that have the highest levels.

As reported by GRACE Communications Foundation Senior Policy Advisor Chris Hunt, writing for Ecocentric, Johns Hopkins researchers collected a variety of chicken samples from grocery stores in 10 cities across the U.S. Some of the meat samples came from conventional sources, while others were U.S. Department of Agriculture (USDA) certified organic or "antibiotic-free." All the samples were tested side-by-side with each other, including in both raw and cooked form.

Upon analysis, the team discovered that the conventional chicken meat samples had the highest levels of inorganic arsenic overall, containing up to four times as much arsenic as the organic chicken samples. These same conventional chicken meat samples contained up to three times more arsenic than the maximum levels proposed, but later retracted, as a safety standard by the U.S. Food and Drug Administration (FDA) back in 2011.

"The levels of inorganic arsenic discovered in chicken are cause for concern, especially since many of us are already exposed to the carcinogen through additional dietary and environmental paths," writes Hunt. "But unlike these other sources of exposure, which typically result from natural arsenic deposits, industry or residual contamination from the days of widespread arsenical pesticide use, as noted in the study, 'arsenical poultry drugs are deliberately administered to animals intended for human consumption.'"

What the study is referring to, of course, is the common practice, at least up until 2011, of industrial chicken producers adding a pharmaceutical drug known as roxarsone to chicken feed. The Pfizer, Inc.-manufactured drug was in heavy use between 2010 and 2011 when the Johns Hopkins study was conducted, and researchers found traces of this chemical in a significant percentage of the conventional chicken meat tested.

According to Hunt's analysis, arsenical chemicals like roxarsone have been in use since the 1940s, when chicken producers began adding it to chicken feed to speed up growth, prevent disease, and improve meat pigmentation. But as we now know, these chemicals are pervasive, and are known to cause cancer, cardiovascular disease, type 2 diabetes, mental impairment, miscarriage, and other serious human health issues.

"[T]his study provides further evidence that continued use of arsenicals in food animal production poses an entirely unnecessary threat to public health," adds Hunt. "While the practice might boost the profits earned by poultry giants and the manufacturers who supply them with arsenical drugs, it's imprudent and irresponsible. As such, the FDA has no legitimate justification for its ongoing failure to prohibit arsenicals from food animal production."