THE FINAL RISE OF GERMANY

Posted by tin Posted on 6:54 PM with No comments 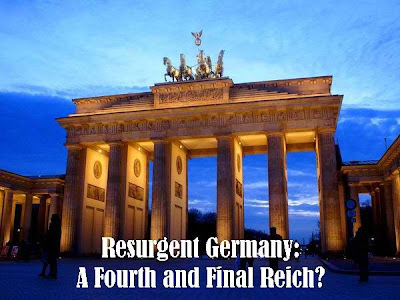 Resurgent Germany and the Final Resurrection of the Holy Roman Superpower European Empire
Many people are aware of the atrocities committed by Germany in World War II, but would consider them ancient history. These people are completely unaware of the legacy which Adolf Hitler drew upon in creating his Nazi war machine.

His was merely the latest resurrection of a war-making empire with a long and bloody history. Did you know that the Bible prophesied of his regime-as well as the terrible emergence of one last resurrection in our day?

From these facts and from what we see in Germany today, there are two overriding themes we ought to let sink into our minds. First, the almost overnight transformation of Germany from a devastated nation sifting through rubble and ashes to one of the most dominant and powerful nations in the world was nothing short of miraculous!

The world is witnessing history repeat itself one more time. Soon, it will all be over.

The book of Nahum is an end-time prophecy about Germany. Nahum 3:16-17 talk about this illusive power. “Thou hast multiplied thy merchants above the stars of heaven: the cankerworm spoileth, and flieth away. Thy crowned are as the locusts [Winston Churchill even called the Germans and their military machine ‘the locusts’], and thy captains as the great grasshoppers, which camp in the hedges in the cold day, but when the sun ariseth they flee away, and their place is not known where they are.”

After World War ii, the Nazis just went underground and disappeared like grasshoppers in wintertime. Suddenly, they were gone. But just as suddenly, they have burst back on the world scene.

In Revelation 17:1-3, the angel says to John, “Come hither; I will shew unto thee the judgment of the great whore that sitteth upon many waters: With whom the kings of the earth have committed fornication, and the inhabitants of the earth have been made drunk with the wine of her fornication … and I saw a woman sit upon a scarlet coloured beast, full of names of blasphemy, having seven heads and ten horns.” God says a wondrous beast shall arise which will affect all inhabitants of the Earth.

Continuing in verse 7: “And the angel said unto me, Wherefore didst thou marvel? I will tell thee the mystery of the woman, and of the beast that carrieth her, which hath the seven heads and ten horns.

through these verses in Revelation 17 and other scriptures, that a great political beast is rising in Europe that will be joined by a great European religious beast in an unholy alliance to conquer the world. Religion is going to emotionally stir the Europeans. And then a megalomaniac will come on the scene to stir up the people as only someone like Hitler could.

The so-called Holy Roman Empire is going to rise to power one final time. In Revelation 17:9-12, it says, “And here is the mind which hath wisdom. The seven heads are seven mountains, on which the woman sitteth. And there are seven kings: five are fallen and one is”

and the other is not yet come”—but it is rising now—“and when he cometh, he must continue a short space. And the beast that was, and is not, even he is the eighth, and is of the seven, and goeth into perdition. And the ten horns which thou sawest are ten kings, which have received no kingdom as yet; but receive power as kings one hour with the beast.”

For a while, Germany and the European Union are going to have a great burst of economic growth as a benefit of their political union. Then, this colossal superstate, with its great military power, will turn on Israel. God says it’s going to happen.

Continuing in Daniel 8:24: “And his power shall be mighty, but not by his own power.” There are nine other nations in the beast alliance besides Germany, but the real power behind the beast is Satan (Revelation 13:4)—that’s what “not by his own power” means. There will be 10 nations or groups of nations, and this German leader, a “king of fierce countenance,” will control them all.

“Berlin Group,” a fringe EU group of nations formed out of a German idea promoting the regular meeting of foreign ministers of the European Union’s leading economies (excluding Britain), recently launched the idea of creating the office of a European supremo.

They have recommended that a powerful new presidency be created within the EU—a super-president—a veritable “Charlemagne” having power over all EU institutions.

Shortly after the “Berlin Group” came out with that startling recommendation, Germany’s Chancellor Angela Merkel, anticipating the now current demise of France’s President Nicolas Sarkozy—whose candidacy she endorsed in France’s national elections—turned to Italy’s Prime Minister Mario Monti to forge a new alliance in the leadership of the EU. Berlin and Rome will now dominate EU policy decisions from here on.

Italian Prime Minister Mario Monti and European Central Bank head Mario Draghi are of the same Jesuit mind in their approach to the crisis. Merkel’s joining forces with them places the control of the EU’s purse strings—plus the influence of Europe’s dominant political power, Germany—directly under Rome’s influence.

On the other hand, The Bavarian pope at the helm in the Vatican engaged in a great crusade of “new evangelization,” against the Anglican Church of Britain.
Tweet