Posted by tin Posted on 8:24 PM with No comments 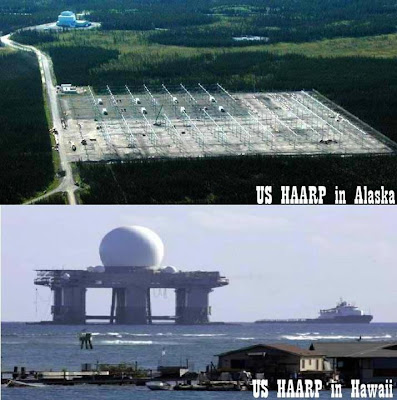 In January 1960, Soviet announced the development of a new, fantastic weapon—one so powerful it could wipe out all life on earth if unrestrainedly used. The New York Times printed part of the story. Khrushchev, of course, was referring to the newly emerging scalar EM weapons.

So in early 1960 the Soviets were in at least what we call the engineering development stage for large scalar EM beam weapons, which would be deployed when finished.

On May 18, 1977, the Soviets signed an agreement with the U.S. and 29 other countries, promising not to attack each other by causing man-made storms, earthquakes, or tidal waves. The Soviets had already tested weather control against the U.S. in 1967 and had been steadily using it against America for almost a year.

Later on, the United States developed their own technology (The HAARP Project.)

There has a lot of damaging evidence of US military weather modification and earthquake triggering operations against foreign states.
The magnetometer presented concrete evidence that HAARP triggered the Japan earthquake and ensuing tsunami. Lately US Government takes down HAARP website to conceal evidence of US Weather Modification and Earthquake Inducing Warfare and Terrorism.

It was also believed that the Chile and Haiti quake was caused by HAARP experimentation. Since man-made weather modification attack is unverifiable, it is very hard to detect.

Hugo Chavez, President of Venezuela accused the United States of causing the destruction in Haiti by testing a ‘tectonic weapon’ to induce the catastrophic earthquake. President Chavez said the US was “playing God” by testing devices capable of creating eco-type catastrophes. It have been reported that the earthquake “may be associated with the project called HAARP, a system that can generate violent and unexpected changes in climate.

HAARP has been met with controversy since the mid-1990s when the State Duma of Russia issued a press release written by international affairs and defense communities on HAARP and signed by 90 deputies:

“The U.S. is creating new integral geophysical weapons that may influence the near-Earth medium with high-frequency radio waves ... The significance of this qualitative leap could be compared to the transition from cold steel to firearms, or from conventional weapons to nuclear weapons.
Tweet