PREVENTING ANTI-CHRISTIAN VIOLENCE 'MUST BE THE PRIORITY OF THE INTERNATIONAL COMMUNITY,' SAYS ITALIAN FOREIGN MINISTER

Posted by tin Posted on 7:51 PM with No comments 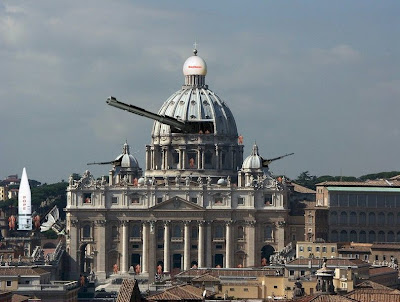 Italian Foreign Minister Giulio Terzi called on world leaders to stop violence against Christians and other religious minorities at a conference discussing the massacre of Christians in Nigeria, held in Rome on July 19.


Condemning the murder of 800 Christians so far this year in Nigeria by Boko Haram, a radical Islamic terrorist group, Terzi said, “Stopping these atrocities must be the priority of the international community.” During the meeting, titled “Stopping the Massacres of Christians in Nigeria: Italy’s Initiatives,” Terzi went on to describe the Foreign Ministry’s efforts to end religious violence around the world.

The meeting was held by the Observatory for Religious Freedom in Rome, an organization set up by the Italian Foreign Ministry and the City of Rome, with the encouragement of the pope. It aims to help Italy’s diplomats protect religious freedom.

Christians are indeed under attack all around the world. As well as being regularly attacked in Nigeria, some of the rebels in Syria are attacking Christians in Damascus. In Gaza, Christians are protesting after Islamic groups kidnapped five Christians in an attempt to convert them to Islam. The number of Christians in the Gaza Strip has fallen from 3,500 to 1,500 over the last few years, according to Ynetnews.

Nigeria is a focal point for religious violence though. A steady pattern is emerging: Boko Haram bombs a church and shoots Christians. As the government does nothing, on some occasions Christian youth go out and indiscriminately attack Muslims in revenge. On July 7, Muslim gunmen murdered around 60 people and made over 300 homeless as they burned villages. Last month, a Boko Haram attack on three churches killed 21. Over 100 people died in the four days of violence that followed.

The new Observatory also aims to fight for religious, or Catholic, freedom in the West. Chairman Massimo Introvigne described “an alarming trend in recent years” of “serious problems of religious liberty in the West, in Europe, in North America.” Speaking as the new organization was established at the end of last month, he said: “I think we should all be aware that religious liberty is not only a problem in Africa or in Asia. It’s a problem everywhere, and there are some disturbing developments also in the West.”

Terzi has consistently spoken out against anti-Christian violence around the world; he brought the subject up at an EU Foreign Affairs Council meeting a few weeks ago.

As anti-Christian violence grows, the Vatican is encouraging states like Italy to confront it. As it gets worse, watch for the Vatican to push Europe to respond more forcefully. A single attack on September 11 changed American foreign policy for a decade. A single massacre, if large and bloody enough, could have a similar effect on Europe.

Europe is aware of the violence, and is taking some limited steps to stop it. Watch these efforts closely—Bible prophecy shows that the Vatican and Europe will confront this violence more directly as the Catholic Church rises in power. From theTrumpet
Tweet