Posted by tin Posted on 7:54 PM with No comments 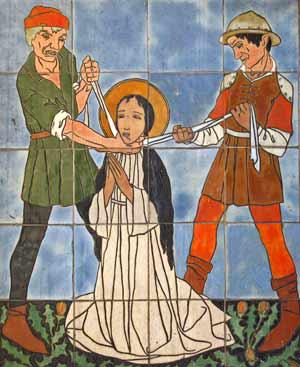 “Why should or would a woman be loyal to, or follow, or support a religion that is biased against her and all women in general?“

St. Bernard said, “It was easier for a man to bring the dead back to life than to live with a woman without endangering his soul.” Since the beginning of time, the above is just one of the many discriminatory statements, toward women, written in religious text.

“The biggest obstacle to the equality of women in our society is the bible, the Genesis story in particular.”– Elizabeth Cady Straton, Suffragette (1895 A Womens Bible)


The Bible tells us that women are forbidden to wear men’s clothing (Bible, Deuteronomy 22:5). We read in the South African newspapers in the year 2007 CE, that women who dare to wear pants in some parts of Durban are stripped to their underwear or naked, beaten, and their houses burnt. All this for just daring to wear pants.
link: http://www.religion.woerlee.org/images/women/durban%20pants.pdf

During 2007 CE in Pakistan a fanatical fundamentalist gunman killed a female politician for violating the Islamic dress code
link:
http://www.religion.woerlee.org/images/women/woman%20pakistan.pdf

During 2002 CE a fire broke out in a large girl’s school in Mecca, Saudi Arabia. The Religious police prevented girls who were improperly dressed, (according to the Islamic dress code), from leaving the burning school. The result was that 14 girls burned to death because they were improperly dressed according to the religious police, who actively prevented the fire brigade and police from helping these unfortunate girls. Shame! Unspeakable! Such monsters are no more than unspeakable instruments of a modern religion gone awry.
link:
http://www.religion.woerlee.org/images/women/mecca%20fire.pdf


HISTORY OF SEX, MARRIAGE AND CELIBACY IN TRADITIONAL RELIGIONS:

325 AD: The Council of Nicaea decreed that no priest will be allowed to marry after ordination.

385 AD: Pope Siricius decreed that priests married before ordination must not make love with their wives afterwards.

590-604 AD: Pope Gregory “The Great” decreed that all sexual desire was sinful and only for producing children.

1074 AD: Pope Gregory VII decreed all priests must be celibate.

St. Paul in the first letter to Timothy decrees: “But I suffer a woman not to teach, nor to usurp authority over a man, but to be in silence. For Adam was first formed then Eve.”

Tertullian: “The judgment upon your sex even today; and with it inevitably endures your position at the bar of justice. (Woman) you are the gateway to hell.”

St. Jerome, Epistle 107: “For my part I say that mature girls should not bathe at all, because they ought to blush to see themselves naked.”

St. Gregory of Nazianzum: “Woman – a foe to friendship, an inescapable punishment, a necessary evil.” “Among save beasts, none is found so harmful as woman.”

St. Clement of Alexandria: “Every woman should be filled with shame by the thought that she is a woman.”

The Gospel of Thomas 114: (Simon Peter) “Let Mary go forth from among us, for woman are not worthy of the life.” (Jesus) “Behold, I shall lead her, that I may make her male, in order that she also may become a living spirit like you males. For every woman who makes herself male shall enter into the kingdom of heaven.”

Tertullian: “You destroyed so easily God’s image, man. On account of your desert – that is death – even the son of god had to die.”
Boethius, a 6th century Christian: “Woman is a temple built upon a sewer.”

At the Council of Macon in AD 585 the bishops voted that women had no souls. At the Council of Trent (1545-1563) in Trento, Northern Italy, it took one day to decide than animals don’t have souls but 21 days to decide that woman actually do have souls. Woman-beating was a normal Christian man’s duty according to the Decretum of 1140, Fir Cherubino’s 15th century rules of marriage, and quotes from Bishop Epiphanus in the 4th century. Anti-woman quotations appear in the Old Testament, Numbers 25, and in Deuteronomy 25:11.

Excerpt: “Afghan women were forced to wear the burqa at all times in public, because, according to one Taliban spokesman, “the face of a woman is a source of corruption” for men not related to them. In a systematic segregation sometimes referred to as gender apartheid, women were not allowed to work, they were not allowed to be educated after the age of eight, and until then were permitted only to study the Qur’an.

Women seeking an education were forced to attend underground schools, where they and their teachers risked execution if caught. They were not allowed to be treated by male doctors unless accompanied by a male chaperone, which led to illnesses remaining untreated. They faced public flogging and execution for violations of the Taliban’s laws”


WHAT ABOUT JUDAISM (ORTHODOX) AND WOMEN?
http://www.guardian.co.uk/commentisfree/belief/2009/jun/10/judaism-women-feminism-orthodox

There is however, a deep conflict between Judaism and feminism which stretches from the public (in synagogue) to the private. For example, in all Orthodox synagogues men pray separately from women and in many women are relegated to an upstairs gallery. Gender hierarchies are entrenched in Jewish thought: a blessing orthodox Jewish men are required to say everyday thanks a God “who has not made me a woman”.

So, once again, the chilling question, “Why should or would a woman be loyal to, or follow, or support a religion that is biased against her and all women in general?”

How about alternatives to these biased religions? Do a search on “Beyond all Religion”, and/or “Secular Humanism”, or just simply live a life of compassion, kindness and love. No god needed.
Tweet