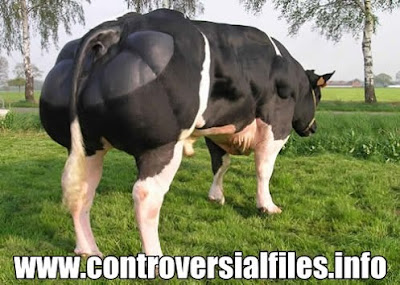 Did you know that some varieties of beef on the market today come from cattle that has been deliberately modified to grow abnormally large muscles for beef production?
A recent segment aired by the National Geographic Channel offers a glimpse into the eerie production of so-called "super cows," which intentionally bear a defective gene that allows them to grow atypically large with a "double muscle" build.

This somewhat "mutant" cattle breed is officially known as the Belgian Blue, and its origins date back to the early 1800s when Belgian scientists and farmers decided to breed native cattle with Shorthorn and possibly Charolais cattle varieties to create a stronger and more beefy crossbreed. Over time, cattle breeders would select the strongest and largest animals of each variety and breed them together to create allegedly superior offspring.

"Selective breeding ... is used by farmers to enhance desirable characteristics in their animals," explains the National Geographic Channel about the process. "[It's] all about managing sex. To create these Belgian Blues over 100 years, farmers have only allowed the cows and bulls with the greatest muscle mass to mate. And the result is a bull that weighs over a ton."

The tradition of breeding Belgian Blues in this manner lives on. But today's Belgian Blues are even more selectively bred, as technological advances have given breeders new insight into genetic modifications. As it turns out, the most successful Belgian Blues possess an inherent genetic defect that causes their muscles to continue growing, which is what gives them their enormous size.

Though technically variant from the type of genetic modifications found in Monsanto's soybeans, for instance, the Belgian Blue is purposely bred with this defective gene, known as myostatin, which alters its normal growing patterns. The myostatin gene is responsible for telling the body when to stop producing muscle, and in Belgian Blues, its failure allows exceptional growth above and beyond the norm.

"There is a gene that regulates the growth of muscles in cattle," adds the National Geographic Channel about the process. "These cows have been selectively bred from animals that contain a copy of this gene which doesn't work. As a result, their muscles grow far larger than normal. To ensure the defective gene is passed on, sex for the Belgian Blues has been replaced by technology in the form of artificial insemination."

What is the purpose of all this? To create more beef, of course, which in turn generates more profits for the factory meat industry. And Belgian Blues are reportedly becoming more popular in the U.S., where greed and profits are king.
Tweet