Posted by tin Posted on 4:37 PM with No comments 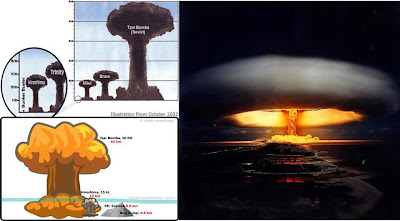 The largest nuclear test ever, the largest man-made explosion in human history,
was conducted by the Russians, known as Tsar Bomba, and it dwarfed all previous tests by a factor of 3.

It had a yield of 57 megatons, the equivalent of 10 times all the explosives detonated during World war 2, including both of the nuclear devices dropped on Nagasaki and Hiroshima, ‘Fat Man’, and ‘Little Boy’.

The Tsar Bomba (also named ‘Big Ivan’) fireball reached nearly as high as the altitude of the release plane, and was seen and felt almost 1,000 kilometres from ground zero. The heat from the explosion could have caused third degree burns at a range of 100 km. The subsequent mushroom cloud was about 64 kilometres high (nearly seven times higher than Mount Everest) and 40 kilometres wide. The explosion could be seen and felt in Finland, breaking windows there and in Sweden. Atmospheric focusing caused blast damage up to 1,000 kilometers away. The seismic shock created by the detonation was measurable even on its third passage around the Earth. The energy yield was around 7.1 on the Richter scale , but since the bomb was detonated in air rather than underground, most of the energy was not converted to seismic waves.

The Tsar Bomb detonated at 11:32 on October 30, 1961 over the Mityushikha Bay nuclear testing range (Sukhoy Nos Zone C), north of the Arctic Circle over the Novaya Zemlya archipelago in the Arctic Sea.
Tweet