Home » animals » pesticides that kill bees: Honey and almonds are at risk

pesticides that kill bees: Honey and almonds are at risk

Posted by tin Posted on 3:57 AM with No comments 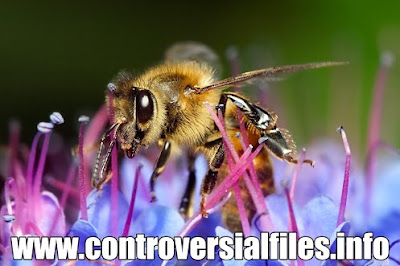 Two studies have found that the pesticide neonicotinoid, used since 1990, is contributing to killing the honeybees needed for pollination of our food crops.
Our food supply is reliant on bees to pollinate the crops. They contribute to $15 billion worth of our food supply. In fact, it's estimated that one third of the food in our diet is connected to honeybees in some way. Honeybees pollinate our corn, apples, almonds, lemons, broccoli, onions, cherries, oranges, avocadoes, and other fruits, vegetables and flowers, not to mention honey. California's almond crop will soon be at stake, as the trees need pollination every year and there are not enough honeybees to do the job.

Neonicotinoid insecticide is contributing to the declining bee population in the U.S. and around the world. The pesticide affects over 94 million acres of land, via seeds treated before they are planted, especially corn, cotton and sunflower seeds. Even small amounts of neonicotinoid make the bees more susceptible to other diseases, and reduces their homing ability. Continued exposure to the chemical is fatal to honeybees. Colony Collapse Disorder caused beekeepers to lose up to 90 percent of their hives in 2006.

Honeybees dying caused the worst honey production year in 2012, and may lead to a crisis in the California almond industry. The American Bee Journal reported that the shortage of nectar and pollen in the hives in 2012 took a toll on the bee colonies as the bees suffered from poor nutrition. Fewer bees survived the winter. Of the 1.6 million bee colonies that California relies on to pollinate the almonds, 500,000 come directly from California and the rest are brought in by trucks from across North America. The loss of bee colonies could wreak havoc with the almond pollination period in California, and lead to an economic loss for California almond growers, as well as higher prices of almonds for consumers. California supplies 80 percent of the world's almonds, three quarters of which are shipped worldwide. Almonds are a $3 billion industry.

A study published in the journal Science observed honeybees and bumble bees. They discovered that the beehives treated with small, nonlethal doses of neonicotinoid insecticides reduced the production of queens by 85 percent compared to the pesticide-free hives. Since the bees only live for one year, production of queens is vital to continuing the bee colonies. The study also attached radio transmitters to honeybees to watch them gather pollen and pollinate in areas with and without neonicotinoid insecticides. They found that the bees in the pesticide areas were twice or three times more likely to die outside the hive and they lost their homing ability, which could be one of the causes leading to Colony Collapse.

In 2012, the Environmental Protection Agency (EPA) was asked to stop the use of neonicotinoid insecticides. The researchers, beekeepers, and environmental groups have asked the EPA to require pesticide markers to test the product, and the EPA reported that they began to review the studies in 2012.

Pesticides based on neonicotinoid available to farmers and the public might be labeled with the following active ingredients: Imidacloprid, Thiamethoxam, Abamectin, Thiocloprid, or Acetaminiprid, according to a list compiled by the Pesticide Action Network UK, and a petition to the EPA collected over 120,000 signatures by March of 2013, with 5,000 more needed before the end of April, 2013.
Tweet